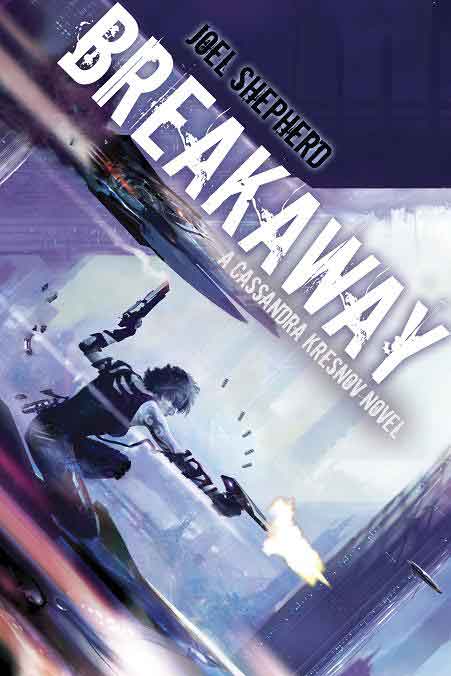 Cassandra Kresnov is a highly advanced hunter-killer android. She has escaped the League and fled to Callay, a member of the Federation. Because of her fighting skills she was able to save the president’s life and is now a trusted member of the security forces. However, not all Tanushans are happy to have her on their turf and Cassandra has to tread carefully. As Callay moves towards a vote on whether to break away from the Federation, confusion reigns and terrorist groups plot their own agendas.

Cassandra becomes involved with two young troubleshooters for the secret service and finds out more than she ever wanted to know about the Tanushan underground and those on the fringes.

Furthermore, there is a delegation from the League in Tanusha, and Cassandra is not sure that they won’t try to take her back. Breakaway is a great story with a cracking plot and strong characters. At its heart is the enigma of Cassandra: Is she more human than human, or is she totally untrustworthy?

“In this action-packed sequel to Crossover (2006), Australian author Shepherd revisits the far-future multiracial capital city Tanusha, where two factions, the League and the Federation, war over the future of the planet Callay, and the enigmatic android heroine, Sandy, gets caught in between. The personal complicates the political....Beneath the glitz of snazzy weaponry, unstoppable heroes and byzantine political machinations is a very real struggle about the nature of humanity and trust.” —Publishers Weekly

"There's enough action and intrigue here to fill three or four lesser books. I was completely hooked by the direction that the story led me in. Characterisation was spot on as well; Cassandra and Rice were two characters that I completely empathised with and I even found myself keeping an eye out for other 'lesser' characters to see how they were getting on....I'm sure that exciting
times lie ahead for Cassandra Kresnov."
—Graeme's Fantasy Book Review

“At times a political thriller and at times an action-packed sci-fi yarn,
Breakaway makes for a very satisfying read....the Pyr logo continues to be associated with quality reads!”
—Pat’s Fantasy Hotlist

“Joel Shepherd's first novel Crossover impressed me a lot, reflecting the age-old question of how an artificial human would feel in a new, original way. It combined some interesting moral and political questions with excellent action set-pieces to keep both head and adrenaline satisfied. Here in Breakaway...in the most interesting part of the book, the politics surrounding [military android Cassandra Kresnov] and her status as human or machine is complex and heated....It is this extremely nuanced political spectrum that truly brings Breakaway to life....The debates between Callay's representatives are as exciting as the running gun battles in its streets....an extremely well rounded novel. Recommended.”
—SFCrowsnest.co.uk

“Readers who have read Crossover, the first Cassandra Kresnov novel, will find Breakaway is just as good. The tale contains great characterizations, especially the heroine, a cultural look at an advanced civilization, and plenty of political intrigue. All this contributes to make Breakaway a one-sitting reading experience.”
—Alternative-Worlds.com

“Cassandra Kresnov is a compelling addition to the world of
science fiction's femmes fatales.”
—Marianne de Pierres, author of the Parrish Plessis series

Joel Shepherd was born in Adelaide, South Australia, in 1974. He has studied Film and Television, International Relations, has interned on Capitol Hill in Washington, and traveled widely in Asia. His first trilogy, the Cassandra Kresnov Series, consists of Crossover, Breakaway and Killswitch. Visit Joel Shepherd's Web site at www.joelshepherd.com.