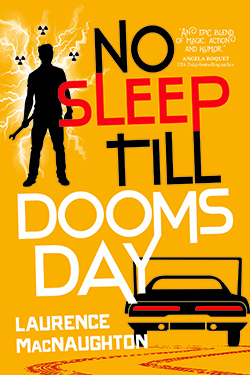 No Sleep Till Doomsday

An inexperienced sorceress must retrieve a priceless artifact from the enchantress who stole it, break the curse on her half-demon boyfriend, and stop her friends from turning on each other before the enchantress calls down doomsday.

When a deadly enchantress steals an amulet of unimaginable power, crystal sorceress Dru Jasper must risk everything to get it back. With this amulet in hand, the enchantress could break the sixth seal of the apocalypse scroll. If she does, the seas will boil, the stars will fall from the sky, and the earth itself will split apart. Overall, bad news.

There’s only one way to stop doomsday: find the apocalypse scroll first. But Dru’s attempts to track down the scroll run smack up against the dark secrets of her half-demon boyfriend, Greyson. His uncanny connection to the demon-possessed muscle car Hellbringer could threaten the fate of the world—unless Dru can find a way to break his curse for good.

Which isn’t easy, since one of her friends has decided to solve the problem by eliminating Greyson. As her boyfriend battles her best friends, Dru is locked in a high-speed chase with the enchantress, fighting a fierce magical duel she cannot win alone. Can Dru save Greyson’s soul, salvage her friendships, and find the apocalypse scroll in time to stop doomsday?

Praise for the series:
“A fascinating series where anything is possible and everything has a cost.”
—Publishers Weekly

“A fast and fun ride that keeps you entertained all the way through its unyielding mayhem.”
—Starburst Magazine

“Comedy, fantasy, and romance blend together smoothly…. This bubbly blend of genre tropes has spirit and whimsy.”
—Kirkus Reviews

“It has everything.”
—Book Riot

Laurence MacNaughton is a fantasy writer and the author of A Kiss Before Doomsday, It Happened One Doomsday, The Spider Thief, and Conspiracy of Angels.