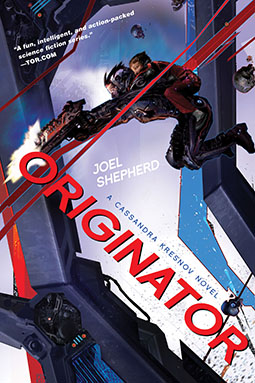 Cassandra Kresnov must find the answers that could free her people—or doom her family.

A quarter of a million people die in the destruction of the moon Cresta. The League civil war is accelerating out of control, but projections indicate that as their technologically induced sociological dysfunction continues, all of humanity may face a similar fate. In the aftermath of Cresta’s destruction, Sandy Kresnov discovers the alien Talee operative Cai in Tanusha, there to learn just how far the technologically-induced insanity has gone. The Talee have seen this before, and they are terrified of anything threatening a recurrence.

Meanwhile, Sandy’s old nemesis Renaldo Takewashi, the self-proclaimed “father” of synthetic intelligence, comes to the Federation seeking asylum. Talewashi may even have a cure—previously unknown Talee technology implanted into a human child subject—Sandy’s little boy, Kiril. But it is exactly this technology that the Talee fear, and they will exterminate anyone caught using it.

Now, Sandy must fight to save her family from a terrible new threat, but doing so may plunge humanity into another destructive war between humans, or worse, against the massively-advanced Talee. And what final secret are the Talee protecting about the origins of synthetic humans like Sandy that could either liberate Sandy’s fellow synthetics from bondage or spell disaster for all humanity?

Praise for the Cassandra Kresnov novels:

“Outstanding. I love this series! Cassandra Kresnov is a captivating heroine, and Joel Shepherd writes with skill and insight.”
—Jeff Carlson, international bestselling author of Interrupt

“A fast-paced story of intrigue and adventure set against galactic politics.
With particular appeal to readers of high-tech sf and cyberpunk,
this title belongs in most sf collections.”
—Library Journal

“Shepherd has proven his ability to deliver politically and action charged science fiction…Kresnov is a strong character and a very human non-human character at that…. A thrilling, thought-provoking set of novels.”
—SF Signal

Joel Shepherd is the author of five previous novels in the Cassandra Kresnov series—Crossover, Breakaway, Killswitch, 23 Years on Fire, and Operation Shield—and four novels in the Trial of Blood and Steel series—Sasha,Petrodor, Tracato, and Haven. He has studied international relations as well as film and television, interned on Capitol Hill in Washington, and traveled widely in Asia.