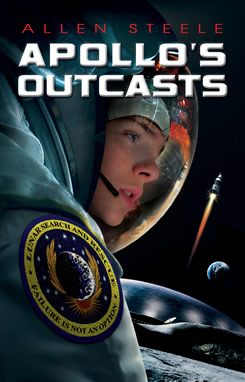 In the tradition of Robert A. Heinlein's juvenile classics, crafted with a modern sensibility

Jamey Barlowe has been crippled since childhood, the result of being born on the Moon. He lives his life in a wheelchair, only truly free when he is in the water. But then Jamey's father sends him, along with five other kids, back to the Moon to escape a political coup d'etat that has occurred overnight in the United States. Moreover, one of the other five refugees is more than she appears.

Their destination is the mining colony, Apollo. Jamey will have to learn a whole new way to live, one that entails walking for the first time in his life. It won't be easy and it won't be safe. But Jamey is determined to make it as a member of Lunar Search and Rescue, also known as the Rangers. This job is always risky but could be even more dangerous if the new US president makes good on her threat to launch a military invasion. Soon Jamey is front and center in a political and military struggle stretching from the Earth to the Moon.

"There aren't many people writing fiction grounded in realistic scientific explanation. . . . Allen Steele is among the best."
—St. Louis Post-Dispatch

"Steele is a journalist of the SF imagination. . . . His reporting on the nuts and bolts of this almost-here will stick in the mind."
—Locus

"The closest thing the science fiction world now has to Robert A. Heinlein."
—SF Revu

Allen Steele was a journalist before turning to his first love, science fiction. Since then he has published seventeen previous novels and nearly one hundred short stories. His work has received numerous awards, including three Hugos, and has been translated worldwide. A lifelong space enthusiast, he has testified before Congress in hearings regarding space exploration, has flown the NASA space shuttle simulator, and serves as an advisor for the Space Frontier Foundation. Steele lives in Massachusetts with his wife and dogs.

Visit him online at
www.allensteele.com