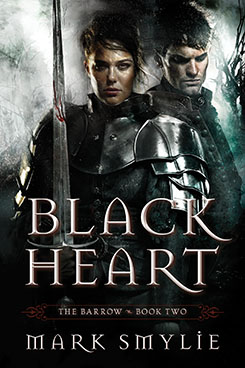 The last survivors of the raid on the Barrow of Azharad have scattered to the four winds, each walking a separate path. For some, it is the path of noble service, as the households of great kings and warlords beckon, offering a chance to enter the fray of politics with the fate of nations on the line. For others, it is the path of secrets and magic, as the veil of the world parts to reveal the hidden truths that dwell in shadow and spirit.

And for Stjepan Black-Heart, royal cartographer and suspected murderer, it is the path of battle and sacrifice, as he is summoned to attend the household of the Grand Duke Owen Lis Red, the Earl Marshal to the High King of the Middle Kingdoms, on his latest campaign to find and kill Porloss, the Rebel Earl: an elusive quarry lurking behind an army of ruthless renegade knights in the wild hills of the Manon Mole, a land where every step could be your last, and where lie secrets best left undisturbed.

PRAISE FOR THE BARROW:

“A gritty fantasy adventure set in a vivid and complex world. Fans of Joe Abercrombie and Scott Lynch will love [it].”
—Mike Lee, author of The Rise of Nagash

“’Epic’ doesn’t even begin to describe the nuances and complexities of the plots and alliances in this fresh take on highly recommended heroic fantasy.”
—Jeff VanderMeer, World Fantasy Award-winning author of Annihilation

“I love Mark Smylie’s world. Fans of deep, intricate settings with complex cultures and fascinating histories are in for a treat with The Barrow. Anyone who likes Steven Erikson should check this out.”
— Django Wexler, author of The Thousand Names

“Fans of quest-centered stories will find this well worth their time.”
—Publishers Weekly

Mark Smylie is the author of The Barrow. He has worked as a writer, illustrator, editor, and publisher for over a decade. His epic military fantasy graphic novel series, Artesia, was first published by Sirius beginning in 1999. He was nominated for the Russ Manning Award for Best Newcomer that year, and for an Eisner Award for Talent Deserving of Wider Recognition in 2001. Over the years his illustrations have appeared in game books from Wizards of the Coast, White Wolf, and most recently Kobold Press, and in collectible card games from AEG. He designed and illustrated a role-playing game based on Artesia that won the Origins Award for Role-Playing Game of 2006 and three Indie RPG Awards, and was nominated for six ENnies. Mark founded Archaia Studios Press (ASP) in 2002 as a self-publishing home for his graphic novels, and the company, now an imprint at BOOM! Studios, has expanded over the years to publish a wide variety of American and European graphic novelists, including award-winning titles such as Mouse Guard, The Killer, Return of the Dapper Men, and Jim Henson's Tale of Sand.