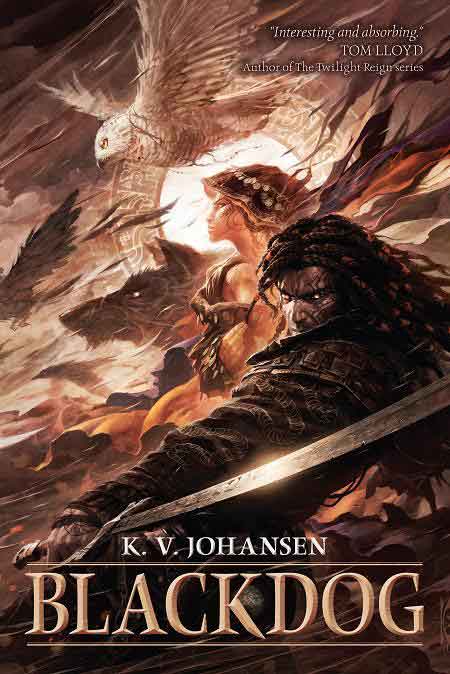 Long ago, in the days of the first kings in the north, there were seven devils...

And long ago, in the days of the first kings in the north, the seven devils, who had deceived and possessed seven of the greatest wizards of the world, were defeated and bound with the help of the Old Great Gods...

In a land where gods walk on the hills and goddesses rise from river, lake, and spring, the caravan-guard Holla-Sayan, escaping the bloody conquest of a lakeside town, stops to help an abandoned child and a dying dog. The girl, though, is the incarnation of Attalissa, goddess of Lissavakail, and the dog a shape-changing guardian spirit whose origins have been forgotten. Possessed and nearly driven mad by the Blackdog, Holla-Sayan flees to the desert road, taking the powerless avatar with him.

Necromancy, treachery, massacres, rebellions, and gods dead or lost or mad follow hard on their heels. But it is Attalissa herself who may be the Blackdog’s—and Holla-Sayan’s—doom.

"Johansen's characters project believability, and her world is full of rich and vivid detail. High fantasy for lovers of mythology and of powerful beings in human form, this adult fantasy debut should appeal to fans of Robert Jordan's 'Wheel of Time' series."
—Library Journal

"Interesting and absorbing; Blackdog takes as its heart, and its strength, a subject that most fantasy writers shy away from—the Gods themselves."
—Tom Lloyd
Author of The Twilight Reign series

K. V. Johansen was born in Kingston, Ontario, and is the author of numerous works for children, teens, and adults. She predominantly writes secondary-world fantasy but is also the author of some science fiction and literary criticism, and of a collection retelling medieval Danish ballads. With an artist friend, she is also working on a manga-style adaptation of a short story set in the Blackdog world. Johansen has an MA from the Centre for Medieval Studies at the University of Toronto. Her lifelong interest in ancient and medieval history and the history of languages has had a great influence on her writing and world building. Occasionally, she masquerades as an editor, freelance journalist, or book reviewer, and dabbles (infrequently) in illustration. She lives in New Brunswick with a moderately wicked dog.