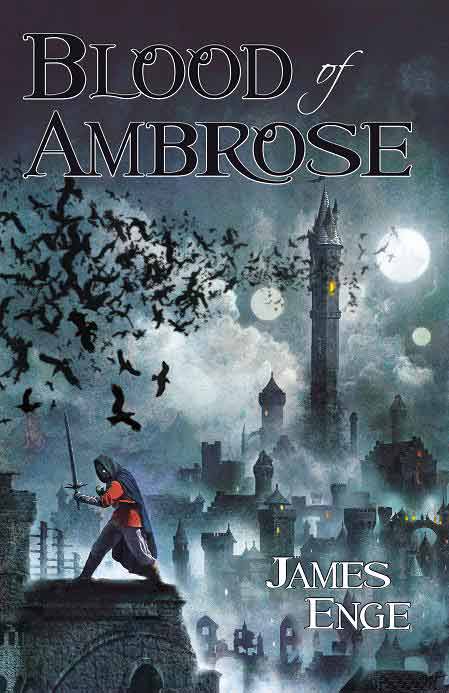 In a remote city on the edge of two worlds, where blood has power and water is more precious than freedom, three far-flung friends unite on a quest to save their families. Sal Hrvati’s estranged father has brought more into the world than the woman he loved. Instead of saving her from the Void Beneath, he has summoned an unknown creature — a creature with a mission of its own and a past that stretches back to the beginning of the world. The quest to find both of them entangles Sal and his companions in a hunt for magical treasure on the floor of the Divide, a mighty crack in the earth inhabited by creatures that are not remotely human. Desert landscapes and dirigibles feature in a fast-paced fantasy that combines romance, adventure, and humor with an original take on magic.

The Books of the Cataclysm take inspiration from many arcane and mythological sources. In positing that this world is just one of many “realms,” three of which are inhabited by humans during various stages of their lives, it begins in the present world but soon propels the reader to a landscape that is simultaneously familiar and fantastic.

"I discovered James Enge through his story in the Swords & Dark Magic anthology, and I am so glad that I did. His work has rekindled my love for sword & sorcery through its combination of vigorous action, depth of character, and crisp prose...His books have a classical heft to them, but are neither stiff nor dated. He refreshes the genre by taking old roads and then suddenly going off into the misty woods beyond, making new paths that wind in and out of our expectations. Really top-notch stuff!" —The Erudite Ogre blog

"Blood of Ambrose is slick, weaving a dark tale of despair and death as our
heroes struggle to save their kingdom and, as the book moves forward, the entire
continent as a darker and far more dangerous adversary is revealed. Enge's style is more show than tell and for Blood of Ambrose this works magically as the
Two Cities of the Ontilian Empire seem to breathe life throughout the pages….
It seemed too soon when I reached the end, so well had Enge penned this
barbaric and epic tale. I fully understand now why the book was recently
nominated for Best Fantasy Book of the Year."
—Shiny book Review

"Enge has crafted unique and exciting tales that revolve around one of the coolest characters ever in fantasy. In fact, I think I just may have a man-crush on Morlock Ambrosius.… Blood of Ambrose is such a fun story to read. Enge is one of those rare authors whose style and prose is perfect for a fantasy — he has that ability to create language that sounds archaic but is still understandable and flows like a bard's tale.…James Enge has earned himself another fan in this reviewer."
—Fantasy Literature

"Enge's prose is tight and efficient, devoid of the rambling, oft-unendurable meandering descriptive passages that typify the high-fantasy genre. The setting is rich in detail, a masterful creation of world building, while the magic system that runs through the narrative proves ferociously imaginative yet impressive in its consistency... An impressive fantasy debut."
—Joseph Mallozzi's weblog,
where book has been chosen for discussion, July 6, 2009

"James Enge writes Blood of Ambrose with a subtle elegance that disguises his extraordinary narrative skill. The humor is natural and unforced. The characterization rings true, even under the revelation of shocking realities. The horror is never glorified, and it is all the more horrific for it. And the plot grows with organic grace. You won't find any quests here, nor the usual clichés or trappings of epic fantasy. No, these pages drip the unexpected, and they will make you laugh and scream and cry and thirst for more... Simply put, Blood of Ambrose is a powerful and fun stand-alone novel. No cliffhangers. No commitment to three or five or twelve book arcs. Savor it. Read it slowly, and prepare your table for This Crooked Way."
—Adventures in SciFi Publishing blog

"When, less than a week after picking up the book, David Eddings died, I was shocked by the coincidence, but comforted that I had found such a worthy successor for my time... The standalone novel is such a rarity in the fantasy isle that walking readers through a character's adolescent in one volume, never mind doing it convincingly, is a feat worthy of recognition in and of itself. But Enge does tell the story convincingly. At its heart, Blood of Ambrose is a coming of age tale that follows the Lathmar the seventh from the tender age of twelve to manhood. In that, this novel succeeds beautifully. The combination of brevity, rapid pacing, and convincing character development mark Enge out as an author to watch and Blood of Ambrose as a future classic of the Young Adult fantasy section."
—The Great Geek Manual blog

"I've long loved Enge's Morlock stories in Black Gate, and this offers a
heaping helping of the Ambrosii and their complicated family dynamic.
In a way, this is a coming-of-age story, but it's also a study of family relationships, and it's a darn fine sword and sorcery epic as well. I love the sly asides and
vivid imagery, but those never overpower the human elements of the story. I'm hanging onto this one—I bet it'll repay a reread down the road."
—Electronic Leaves blog

"...[it's] more than a decent debut with a nice, flowing style, intriguing
characters and a unique idea. Its ending led me to expect that we'll see a
great deal more of Ambrosii in the sequel, and I look forward to it."
—Realms of Speculative Fiction

"Chewed through this in about four days, which for me is a remarkable pace when it comes to 400-page volumes. Fantastic book with a neat plot, inventive fantasy elements, and sharp prose. Possibly the most fun I've had reading a book since The Lies of Locke Lamora—which is, from me, high praise indeed."
—seantmstiennon's LiveJournal blog

"A powerful obsessive dynastic fantasy with clever shades of
Arthurian mythos. I particularly like the drawing of Morlock and his
dwarven artificer apprentice. Compelling reading."
—Dave Freer, coauthor of the Heirs of Alexandria series

"James Enge's work is like Conan as written by Raymond Chandler:
rich, witty, aware of its genre's traditions but not bound by them, with a
new surprise of plot or turn of phrase every moment."
—Paul Cornell, Hugo-nominated writer of Doctor Who and Marvel comics

He is an instructor of classical languages at a Midwestern university.