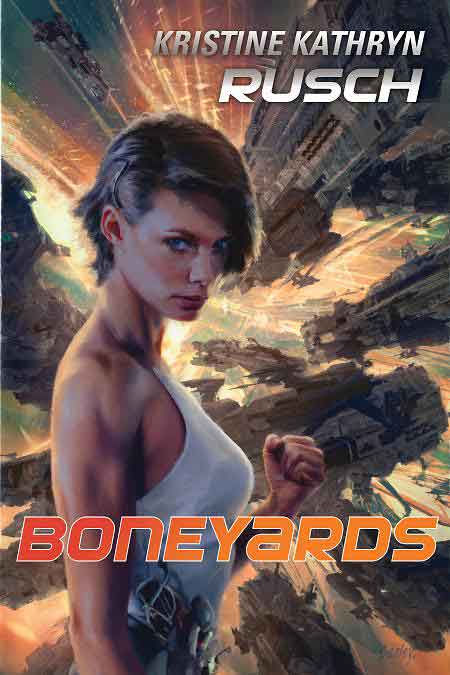 When multiple Hugo Award winner Kristine Kathryn Rusch decided to put her stamp on classic space opera, readers wanted more. Now Rusch’s popular character Boss returns in a whole new adventure, one that takes her far outside her comfort zone, to a sector of space she’s never seen before.

Searching for ancient technology to help her friends find answers to the mystery of their own past, Boss ventures into a place filled with evidence of an ancient space battle, one the Dignity Vessels lost.

Meanwhile, the Enterran Empire keeps accidentally killing its scientists in a quest for ancient stealth tech. Boss’s most difficult friend, Squishy, has had enough. She sneaks into the Empire and destroys its primary stealth tech research base. But an old lover thwarts her escape, and now Squishy needs Boss’s help.

Should Boss take a Dignity Vessel to rescue Squishy and risk losing everything to the Empire? Or should Boss continue on her mission for her other friends and let Squishy suffer her own fate?

Filled with battles old and new, scientific dilemmas, and questions about the ethics of friendship, Boneyards looks at the influence of our past on our present and the risks we all take when we meddle in other people’s lives.

Boneyards is space opera the way it was meant to be: exciting, fast moving, and filled with passion.

"This is classic sci-fi, a well-told tale of dangerous exploration. The first-person narration makes the reader an eyewitness to the vast, silent realms of deep space, where even the smallest error will bring disaster. Compellingly human and
technically absorbing, the suspense builds to fevered intensity, culminating in an explosive yet plausible conclusion."
— RT Book Reviews
Top Pick RT Book Reviews Reviewers' Choice Award nominee

"The pacing is perfect . . . and leaves readers looking for more."
—Monsters and Critics

"Rusch pulls it all off very well, with strong psychological insights
into both Boss and those around her."
—Locus

Praise for Diving Into the Wreck:

"Rusch takes the dangers inherent in deep sea diving and memorably puts
them into the deep dark vacuum of space, making the exploration of the hulk a much more complicated issue than tends to be the case in the SF."
— Best SF Reviews

Kristine Kathryn Rusch is the author of Diving into the Wreck and City of Ruins. She is an award-winning mystery, romance, science fiction, and fantasy writer. She has written many novels under various names, including Kristine Grayson for romance, and Kris Nelscott for mystery. Her novels have made the bestseller lists—even in London—and have been published in fourteen countries and thirteen different languages. Her awards range from the Ellery Queen Readers Choice Award to the John W. Campbell Award. She is the only person in the history of the science fiction field to have won a Hugo award for editing and a Hugo award for fiction. Her short work has been reprinted in sixteen Year's Best collections. She is the former editor of the prestigious The Magazine of Fantasy and Science Fiction. Before that, she and Dean Wesley Smith, started and ran Pulphouse Publishing, a science fiction and mystery press in Eugene. She lives and works on the Oregon Coast.
Visit her online at kriswrites.com