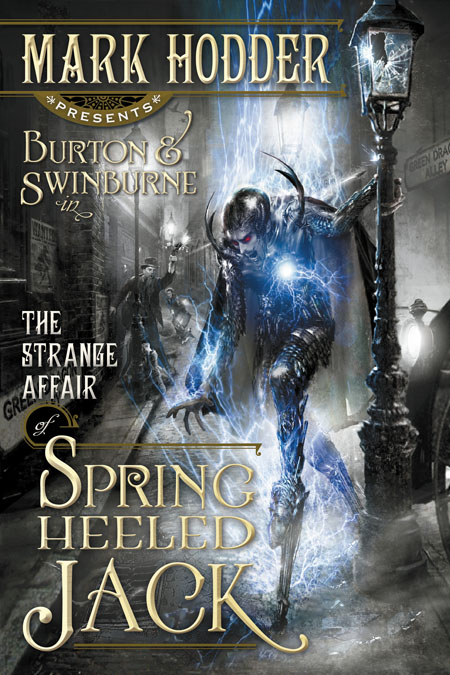 Burton & Swinburne in The Strange Affair of Spring-Heeled Jack

Algernon Charles Swinburne—unsuccessful poet and follower of de Sade; for whom pain is pleasure, and brandy is ruin!

They stand at a crossroads in their lives and are caught in the epicenter of an empire torn by conflicting forces: Engineers transform the landscape with bigger, faster, noisier, and dirtier technological wonders; Eugenicists develop specialist animals to provide unpaid labor; Libertines oppose repressive laws and demand a society based on beauty and creativity; while the Rakes push the boundaries of human behavior to the limits with magic, drugs, and anarchy. The two men are sucked into the perilous depths of this moral and ethical vacuum when Lord Palmerston commissions Burton to investigate assaults on young women committed by a weird apparition known as Spring Heeled Jack, and to find out why werewolves are terrorizing London's East End.

Their investigations lead them to one of the defining events of the age, and the terrifying possibility that the world they inhabit shouldn't exist at all!

"The usual superlatives for really clever fantasy (imaginative, mind-bending, phantasmagorical) aren't nearly big enough for this debut novel. With this one book, Hodder has put himself on the genre map. ...Hodder has brilliantly combined various genre staples - time travel, alternate reality, steampunk - into something you've never quite seen before. His mid-nineteenth-century Britain features steam-driven velocipedes, rotorchairs, verbally abusive messenger parrots, a pneumatic rail system, and robotic street cleaners. ...The book is incredibly ambitious, and the author pulls it off like an old pro: not only is the setting exciting and fresh, the story is thrilling and full of surprises. Hodder's only problem now is to find a way to follow up this exhilarating debut, which will appeal not only to sf/fantasy readers but also to mystery and historical-fiction fans."
—Booklist starred review

"This is an exhilarating romp through a witty combination of nineteenth-century English fact and fiction. Mark Hodder definitely knows his stuff and has given us steam opera at its finest.... A great, increasingly complex, plot, some fine characters, and invention that never flags! It gets better and better, offering clues to some of Victorian London's strangest mysteries. This is the best debut novel I have read in ages."
—Michael Moorcock

"Hodder's debut is genius. I don't think there are very many other ways to put it. His plotting is intricate and intriguing, his voice is superb, the characters are engaging and original, and all of it is so unexpectedly fun. There is no better adjective to describe such all-around greatness. Genius. Don't come into this book
expecting any less."
—Lec Book Reviews

"A remarkably sophisticated and well-executed manifestation of the [steampunk] sub-genre, showing us that new talent can excavate gold out of the most well-plumbed mines. Hodder has arrayed in his book the full panoply of steampunk riffs… Layering this cake with a frosting of mystery, suspense, and time-travel shenanigans, he has created a compulsively readable romp that recalls the best of Tim Powers and James Blaylock… and the plot unfolds with a satisfying cleverness."
—Barnes & Noble Review "The Speculator" column

Mark Hodder is the creator and caretaker of the
BLAKIANA Web site (http://www.sextonblake.co.uk), which he designed to celebrate, record, and revive Sexton Blake, the most written about fictional detective in English publishing history. A former BBC writer, editor, journalist, and Web producer, Mark has worked in all the new and traditional medias and was based in London for most of his working life until 2008, when he relocated to Valencia in Spain to de-stress and write novels. He can most often be found at the base of a palm tree, hammering at a laptop. Mark has a degree in cultural studies and loves British history (1850 to 1950, in particular), good food, cutting-edge gadgets, cult TV (ITC forever!), Tom Waits, and a vast assortment of oddities.

See also volume 2 of the Burton & Swinburne trilogy, The Curious Case of the Clockwork Man.