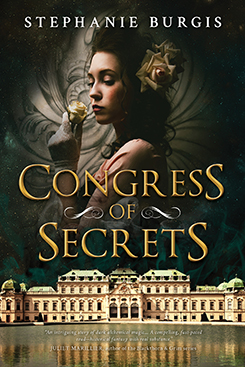 In 1814, the Congress of Vienna has just begun. Diplomats battle over a new map of Europe, actors vie for a chance at glory, and aristocrats and royals from across the continent come together to celebrate the downfall of Napoleon…among them Lady Caroline Wyndham, a wealthy English widow. But Caroline has a secret: she was born Karolina Vogl, daughter of a radical Viennese printer. When her father was arrested by the secret police, Caroline’s childhood was stolen from her by dark alchemy.

Under a new name and nationality, she returns to Vienna determined to save her father even if she has to resort to the same alchemy that nearly broke her before. But she isn’t expecting to meet her father’s old apprentice, Michael Steinhüller, now a charming con man in the middle of his riskiest scheme ever.

The sinister forces that shattered Caroline’s childhood still rule Vienna behind a glittering façade of balls and salons, Michael’s plan is fraught with danger, and both of their disguises are more fragile than they realize. What price will they pay to the darkness if either of them is to survive?

“Congress of Secrets is a heady mix of politics and alchemy, friendship and betrayal, set against the grand sweep of nineteenth-century Vienna and the aftermath of Napoleon’s downfall. This is historical fantasy at its best.”
—Beth Bernobich, author of The Time Roads

“This is a gripping and enjoyable historical fantasy thriller, with engaging characters scheming for survival and revenge, fighting addictive alchemical magic against the lush background of the 1814 Congress of Vienna. This is a great introduction to Stephanie Burgis’s work, and I can’t wait for her next book!”
—Martha Wells, author of The Books of the Raksura series

“A keen sense of adventure and a sparkling wit combine to make Burgis among the best in the business. She’s my go-to writer for pure delight.”
—Justina Robson, author of Glorious Angels and the Quantum Gravity series

“Reading Stephanie Burgis’s Congress of Secrets is like eating a piece of rich, decadent chocolate. Filed with intriguing characters in a vivid and alluring setting, Congress of Secrets weaves its own brand of alchemy, drawing you in to 1800s Vienna. I couldn’t put it down!”
—Sarah Beth Durst, author of The Queen of Blood

“An intriguing story of dark alchemical magic among the power brokers of the Napoleonic era. A compelling, fast-paced read—historical fantasy with real substance.”
—Juliet Marillier, author of the Blackthorn & Grim series


PRAISE FOR MASKS AND SHADOWS:
”Romance, music, and dark alchemy rise to a pitch-perfect ending in this wonderful historical novel. Memorable and utterly delightful.“
—Aliette de Bodard, Nebula Award-winning author of The House of Shattered Wings

”A delightful tapestry of courtly intrigue, deadly magic, music, and romance. Stephanie Burgis has woven an unforgettable tale, steeped in eighteenth-century atmosphere and full of unique, well-drawn characters. This is a must-read for lovers of historical fantasy.“
—Leah Cypess, author of Mistwood

”Terrific. A lush adventure fueled by music and alchemy, and peopled with irresistible characters. Masks and Shadows blends history and magic into a rich, believable love story fraught with royal intrigue. I finished it in one sitting."
—Donna Thorland, author of The Dutch Girl

Stephanie Burgis
is the author of Masks and Shadows. She has published over thirty short stories for adults.Kat, Incorrigible (US)/A Most Improper Magick (UK) won the Waverton Good Read Children’s Award in 2011 for Best Début Children’s Novel by a British writer. It was followed by Renegade Magic/A Tangle of Magicks andStolen Magic/A Reckless Magick. Born in Michigan, she now lives in Wales with her husband, writer Patrick Samphire, and their children. Before becoming a fulltime writer, she studied music history as a Fulbright Scholar in Vienna, Austria, and worked as a website editor for a British opera company.