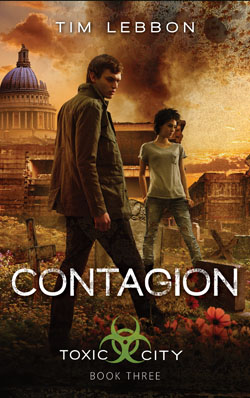 Jack and his friends are in a race against time to save the remaining inhabitants of a postapocalyptic London from a nuclear bomb.

Two years after London is struck by a devastating terrorist attack, it is cut off from the rest of the world, protected by a large force of soldiers (known as Choppers) while the rest of Britain believe that their ex-capital is a toxic, uninhabited wasteland. But that's not true. Jack and his friends know that the truth is very different-and incredible: the few remaining survivors in London are changing; developing strange, fantastic powers; evolving. And the Chopper force guarding London is treating the ruined city as its own experimental ground.

Now, Jack's powers are growing. His friend Lucy-Anne's powers are developing too, and Nomad-that mysterious woman who started it all-is close by. But the Choppers have initiated their final safeguard-a huge nuclear bomb that will wipe out London, and everyone still within its boundaries. Jack and his friends must spread the news of the bomb and save everyone they can. Before that can happen, Jack must face his father, the deadly Reaper, in their final showdown.

"A gripping series depicting a near-future England in the throes of a postapocalyptic disaster. Lebbon tells a grim tale, made a bit lighter by the well-developed friendship among the teens and the devoted relationship between Jack and his sister."
- School Library Journal

TIM LEBBON is a New York Times-bestselling writer from South Wales. He's had almost thirty novels published to date, as well as dozens of novellas and hundreds of short stories. He has won four British Fantasy Awards, a Bram Stoker Award, and a Scribe Award, and has been a finalist for International Horror Guild, Shirley Jackson, and World Fantasy Awards.
20th Century Fox acquired film rights to The Secret Journeys of Jack London series, and he and Christopher Golden wrote the first draft of the screenplay. A TV series of his Toxic City trilogy is in development, and he's also working on new screenplays, both solo and in collaboration with Stephen Volk.