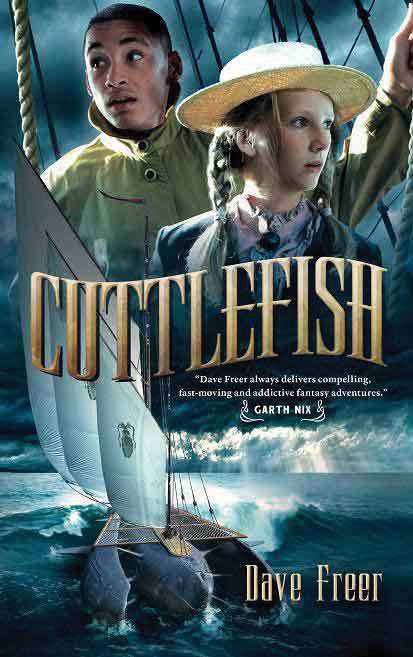 Steampunk adventure with a point!

The smallest thing can change the path of history.

The year is 1976, and the British Empire still spans the globe. Coal drives the world, and the smog of it hangs thick over the canals of London.

Clara Calland is on the run. Hunted, along with her scientist mother, by Menshevik spies and Imperial soldiers, they flee Ireland for London. They must escape airships, treachery and capture. Under flooded London’s canals they join the rebels who live in the dank tunnels there.

Tim Barnabas is one of the underpeople, born to the secret town of drowned London, place of anti-imperialist republicans and Irish rebels, part of the Liberty - the people who would see a return to older values and free elections. Seeing no further than his next meal, Tim has hired on as a submariner on the Cuttlefish, a coal fired submarine that runs smuggled cargoes beneath the steamship patrols, to the fortress America and beyond.

When the Imperial soldiery comes ravening, Clara and her mother are forced to flee aboard the Cuttlefish. Hunted like beasts, the submarine and her crew must undertake a desperate voyage across the world, from the Faeroes to the Caribbean and finally across the Pacific to find safety. But only Clara and Tim Barnabas can steer them past treachery and disaster, to freedom in Westralia. Carried with them—a lost scientific secret that threatens the very heart of Imperial power.

Dave Freer is an ichthyologist turned author living on Flinders Island, in the middle of the Bass Strait (between Australia and Tasmania), with his wife and chief proof-reader, Barbara, four dogs and four cats, and two sons Paddy and James. His first book—The Forlorn (Baen)—came out in 1999. Since then he has co-authored with Eric Flint (Rats, Bats and Vats, The Rats, the Bats and the Ugly, Pyramid Scheme, and Pyramid Power) and, with Mercedes Lackey and Eric Flint (The Shadow of the Lion, This Rough Magic, The Wizard of Karres, Much Fall of Blood) as well as writingthe solo novels A Mankind Witch and Dragon’s Ring, and various shorter works. Besides working as a fisheries scientist for the Western Cape shark fishery he has worked as a commercial diver, and as a relief chef at several luxury game lodges. His other interests are rock climbing (he’s still good at it), diving, flyfishing (he’s still bad at it), fly-tying, wine-tasting and the preparation of food, especially by traditional means—smoking and salting, all the good unhealthy ones