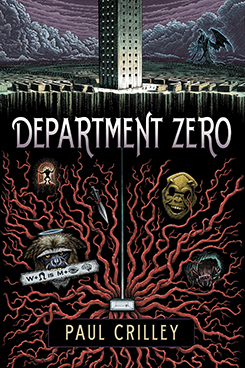 Atticus Graves just wants to make sure his ex-wife doesn’t take away his visitation rights.

But when Graves stumbles through a portal, he finds himself in a world full of monsters and angels. There are thousands of these doors, thousands of different worlds. And now that he’s seen them, Graves is recruited to Department Zero. Graves and his crew clean up any and all supernatural crime scenes.

A secret society of Nazis from another reality, the Cult of Azathoth, have come to our world looking for the Spear of Destiny to bring back Azathoth and the Great Old Ones—among them Cthulhu Himself—from their prison in a timeless dimension.

Graves and Department Zero must travel between realities to a Britain where it’s always 1899, where Queen Victoria has ruled for 101 years. Here they will fight Nazi cultists with royal connections, demon-spawn mafia beneath the sewers of New York, and infiltrate the infamous Wewelsburg Castle in Germany.

All in time to say goodnight to his daughter.

PRAISE FOR THE TWEED AND NIGHTINGALE BOOKS
(The Lazarus Machine and The Osiris Curse):

“Crilley’s newest is a wild ride….Even the setting is intriguing: an alternate 1895 complete with computers, automation and a super-secret government agency. You’ll love the quirky one-liners and the nonstop action.”
—RT Book Reviews

“At times witty and snarky as well as suspenseful and terrifying, this story grabs readers immediately and propels them along the streets of London in what is an alternate 1895. Automatons, computers and steam engines give this book a feel both futuristic and fantastical. The instant connection between Tweed and Nightingale is believable and the reader will eagerly await the sequel to see what is in store for these two….Even those readers who do not embrace the steampunk genre will love the pacing and mystery of this story. Highly recommended for ages 12 and older.”
—SWON Libraries, ROYAL Reviews

Paul Crilley
is the author of The Osiris Curse and The Lazarus Machine. Born in Scotland in 1975, he moved to South Africa when he was eight years old. He was rather disappointed to find out that he would not, in fact, have elephants and lions strolling through his backyard. He now lives in a small village on the east coast of South Africa with his family. He writes fantasy, Young Adult, and Middle Grade books and also works in South African television. He spent a year as part of the writing team for the computer game, Star Wars: The Old Republic, and also writes comics when he can get a chance.