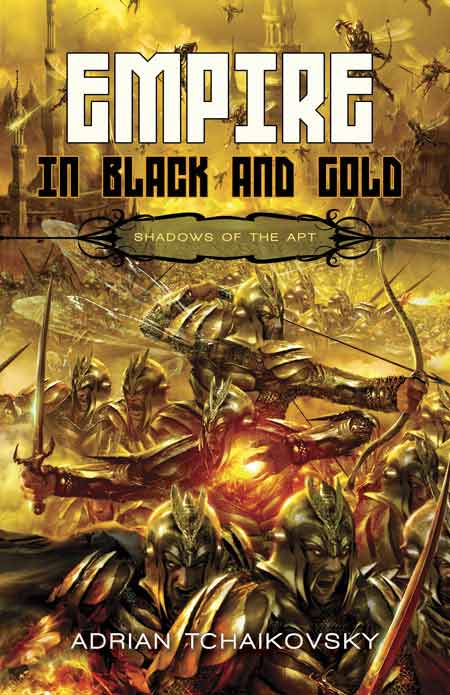 Empire in Black and Gold

The city states of the Lowlands have lived in peace for decades, bastions of civilization, prosperity and sophistication, protected by treaties, trade and a belief in the reasonable nature of their neighbours.

But meanwhile, in far-off corners, the Wasp Empire has been devouring city after city with its highly trained armies, its machines, it killing Art . . . And now its hunger for conquest and war has become insatiable.

Only the ageing Stenwold Maker, spymaster, artificer and statesman, can see that the long days of peace are over. It falls upon his shoulders to open the eyes of his people, before a black-and-gold tide sweeps down over the Lowlands and burns away everything in its path.

But first he must stop himself from becoming the Empire's latest victim.

"Tchaikovsky succeeds at creating a compelling, absorbing and unique plot populated with characters worth investing time in. Interestingly, the humans in this series could be considered the monsters in any other series, and the insect/human hybrid characters are believable and fascinating. A promising debut by a verbose and lyrical writer. Four stars: Compelling—Page-turner."
—RT Book Reviews

"Tchaikovsky's first novel exhibits a vibrancy and creative spirit that commands attention. Set in a world where human tribes are identified with totem insects—e.g., messenger Fly-kinden, military-minded Ant-kinden—the story moves quickly between intensely personal interactions and scenes of large-scale battle... This original and well-told series opener belongs in most fantasy collections and deserves exposure to a wide audience."
—Library Journal

"... one of the most accomplished heroic fantasy debuts since Scott Lynch's Locke Lamora. At various times during my reading, I was reminded of Lynch, of
China Miéville, of K. J. Parker, and even, underneath it all, holding the novel
together and providing its irresistible narrative impulse, Tolkien. Tchaikovsky is not the equal of any of these writers, not yet, but he is smart and talented,
and he's got imagination to burn."
—Realms of Fantasy

"Empire in Black and Gold is a very strong debut. It is a fast-paced and action-driven novel that nonetheless leaves plenty of room for character-development. Its primary strength is, however, the highly imaginative world that Tchaikovsky's has created.... A remarkably strong fantasy debut and I for one am eagerly anticipating the sequels Dragonfly Falling and Blood of the Mantis."
—Book Spot Central

"The world Tchaikovsky has created, and the characters he has peopled it with, are engaging and brilliantly realized...[His] writing and world-building are superb, and his narrative wraps itself around your imagination like a comforting blanket, and it is oh-so-easy to lose yourself to the story. This is a brilliant fantasy creation, and with many more novels already published and on the horizon, I imagine Tchaikovsky's work will be delighting fans for many years to come...Highly recommended." —Civilian Reader blog