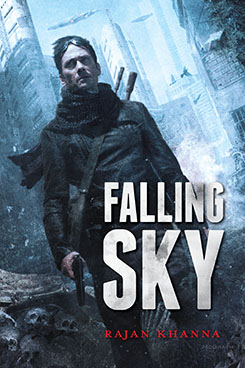 Ben Gold lives in dangerous times. Two generations ago, a virulent disease turned the population of most of North America into little more than beasts called Ferals. Some of those who survived took to the air, scratching out a living on airships and dirigibles soaring over the dangerous ground.

Ben has his own airship, a family heirloom, and has signed up to help a group of scientists looking for a cure. But that's not as easy as it sounds, especially with a power-hungry air city looking to raid any nearby settlements. To make matters worse, his airship, the only home he's ever known, is stolen. Ben must try to survive on the ground while trying to get his ship back.

This brings him to Gastown, a city in the air recently conquered by belligerent and expansionist pirates. When events turn deadly, Ben must decide what really matters-whether to risk it all on a desperate chance for a better future or to truly remain on his own.

"Falling Sky grabbed me right away and held me to the last sentence.
Khanna’s book is short, but sharp as a hidden knife. It’s a fast ride, scary and
twisty-turny, and it also has plenty of airships, zombies, and sarcasm, three of the best things in the world. It’s also very well written—terse but punchy,
like Hemingway meets The Walking Dead. Ever since I read it, I’ve been much less comfortable about living on the ground (too exposed!) but it was worth it to spend some time with Ben Gold and the Cherub."
—TAD WILLIAMS, author of Sleeping Late On Judgement Day: A Bobby Dollar Novel

“Falling Sky is a gritty and gripping post-apocalyptic thriller, a noirish blend of Firefly and The Walking Dead—with a dash of Hayao Miyazaki. Welcome aboard the airship Cherub…your next stop: adventure!”
—E. C. MYERS, author of Fair Coin

“Fast-paced and fiercely imaginative, Khanna’s debut is a different look at a dystopian future.”
—MUR LAFFERTY, author of the Shambling Guides series and winner of the 2012 John W. Campbell Award for Best New Writer

Rajan Khanna
is a graduate of the 2008 Clarion West Writers Workshop and a member of a New York-based writing group called Altered Fluid. His fiction has appeared or is forthcoming in Beneath Ceaseless Skies, Shimmer magazine, GUD, and several anthologies, and has received Honorable Mention in the Year's Best Fantasy & Horror and the Year's Best Science Fiction. He writes for Tor.com and LitReactor.com and his podcast narrations have appeared on sites such as Wired.com, Lightspeed magazine, Escape Pod, Podcastle, and Beneath Ceaseless Skies. Rajan also writes about wine, beer, and spirits at FermentedAdventures.com. He currently lives in New York.