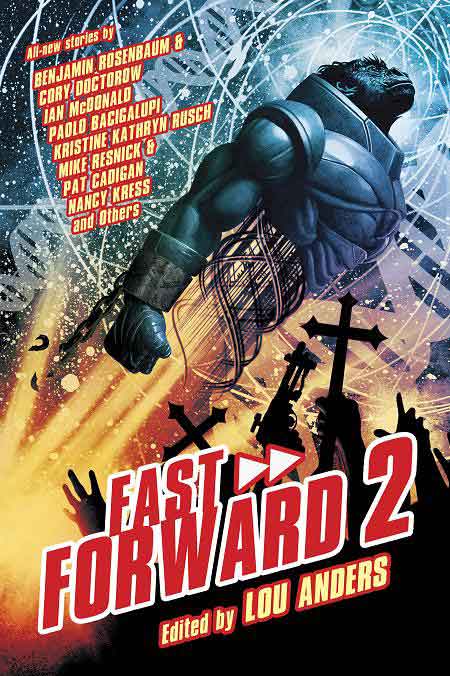 When Fast Forward 1 debuted in February 2007, it marked the first major all- original, all-SF anthology series to appear in some time – and it was met with a huge outpouring of excitement and approbation from the science fiction community. No less than seven stories from Fast Forward 1 were chosen to be reprinted a total of nine times in the four major "Best of the Year" retrospective anthologies, a wonderful testament to the quality of contributions in our inaugural book. What’s more, Fast Forward 1 was hailed repeatedly as leading the charge in a return of original, unthemed anthologies series (several more have since appeared in our wake). Now the critically-acclaimed, groundbreaking series continues, featuring all new stories from:

"Fast Forward 2 is the second volume in Lou Anders' excellent science fiction anthology…. While all stories herein are at least excellent, there were a couple of absolute knockouts…. Paolo Bacigalupe's 'The Gambler' should be required reading at every school of journalism in the world, exploring as it does the question of
click-driven news and coming up with genuinely novel and sometimes
disturbing things to say about it."
—BoingBoing.net, posted by Cory Doctorow

"Anybody that loves science fiction (and fans of the recent output of well-written sci-fi television and movies looking for literary sustenance) can put their trust into Mr. Anders and this instant classic.... Fast Forward 2 is even more electric than last year's first: Anders has assembled some of the best and brightest current stars of the genre, and they turned in stories that, as a whole, really do represent the cutting edge of fiction… Fast Forward 2 is the book to read this year. It's the surest of sure things, and a bargain, to boot."
—Bookgasm.com (#1 Book of the Year)

"Looking at the lineup of top-notch talent contained therein, it's not hard to see why it's gained such positive praise. The author roster here contains mostly seasoned veterans, but it also includes some of the newer voices in science fiction with promising futures. And as if that weren't enough to grab your attention as a reader, then perhaps John Picacio's stunning cover art, which itself has a story to tell, will do the trick. (Some cover art is based on the book it graces. Picacio's artwork here demands to have its story told.) MY RATING: FOUR STARS. BOTTOM LINE: Not a bad story in the bunch." -
—SFSignal.com

"What I hope will be abundantly plain is how strong I found the selection as a whole. It's been suggested to me as a rule of thumb that genuinely enjoying half the stories in an anthology is to be considered a sign of good TOC. If that's the case then one of three things is true: either I'm too easily pleased, or my tastes coincide very closely with Lou Anders, or Fast Forward 2 is an excellent anthology. There's not a single story I actively dislike, and even those I'm lukewarm to have obvious merits." —Futurismic.com

"This is a fine anthology - one of several in what's shaping up to be a remarkable year for original anthologies."
—Locus

"I'd have to say that the three strongest original SF anthologies of the year were Lou Anders' Fast Forward 2, Jonathan Strahan's Eclipse Two, and Strahan's The Starry Rift.… Of these, I think I'd give a very slight edge to Fast Forward 2. The best stories here are probably Paolo Bacigalupi's savvy look at the power of media in a future not too much further down the line… and another of Ian McDonald's wonderful Future India stories, this one about the intricacies of courtship in McDonald's future, "An Eligible Boy"; McDonald must surely be working at the top of his powers these days, and these Future India stories are among the best work he's ever done, which is saying quite alot."
—Gardner Dozois in Asimov's forum

"Looking for some fresh science fiction? The Fast Forward series of anthologies, published by Pyr, prides itself on featuring original stories from science-fiction heavyweights. I love Gardner Dozois' annual The Year's Best Science Fiction collections, but sometimes it's great to get something really new, and Fast Forward doesn't disappoint.… The latest installment, Fast Forward 2… [is] a great collection, with a good mix of stories ranging from hard science fiction to near magic realism. Stand outs for me included "True Names," a novella by [Cory] Doctorow and Benjamin Rosenbaum set in a post-post-post-human universe, and "An Eligible Boy," written by Ian McDonald, that takes place in the mid-21st century India that McDonald has used as the backdrop for his 2004 book River of Gods."
—Discover Magazine's "Science Not Fiction" blog

"Along comes Fast Forward 2, Lou Anders' new anthology of original SF stories, to demonstrate that the cutting edge of the genre is still relevant, and better written than ever before, even as it leaves some of its more fantastical staples - time travel, aliens, etc. - behind. The collection follows on the success of 2007's Fast Forward 1, which impressed critics both within and outside the genre. In this second volume, the future just keeps getting nearer. …overall, it's a great collection….It's also indicative of where the genre is, circa 2008: In other words, more 'realistic' - not to mention better written - than the more colorful stuff of yesteryear, which both broadens its appeal and increasingly erases the distinction between SF and everything else."
—Daily Camera (Boulder, CO)

"If Fast Forward 2 has an overriding theme, it is that the fourteen stories here are highly entertaining."
—Black Gate: Adventures in Fantasy Literature magazine

"First of all, this is a beautiful book. The cover, by John Picacio, is stunning. Within the book, FF2 , like FF1, uses play, pause, and, of course, fast forward icons similar to those on your nearest remote control at line breaks and at the beginning and end of stories in an inspired bit of design.… This is a fantastic anthology that I look forward to rereading. I sincerely hope that Fast Forward becomes an annual anthology; the first two volumes are incredibly strong."
—Little Bits of Everything (Rene Sears live journal)

Included in Locus magazine's 2007 Recommended Reading list
Included in the Locus Online 2007 Best of the Year list
Received "special mention" in Futurismic's Top Five Books of 2007
Was the focus of a weeklong discussion on the blog of Stargate: Atlantis' s executive producer Joseph Mallozzi.
Seven stories from FF1 were reprinted nine times in four "Year's Best" anthologies
And rave reviews:

"[A] wonderful new sf anthology ... the first installment in a new, annual sf anthology series edited by Lou Anders. Anders is setting out to continue the tradition set in original sf anthology series like Damon Knight's ORBIT, which I was practically weaned on. Volume one has some stupendous stories.... At 400+ pages, there's plenty here for everyone. There is, however, one absolute knock-out story in this that is among the most exciting pieces of fiction I've read in years: Paul Di Filippo's incredible 'Wikiworld,' a vividly imagined, funny and weird story about a world run on gifts, wikis, rough consensus and running code. Anders and Di Filippo have put the story online, so you can get an idea of what's in store for you with this excellent volume."
—Cory Doctorow for BoingBoing.net

"The solid, straightforward storytelling of the 19 stories and two poems that Anders (Futureshocks) gathers for this first in a projected series of all-original SF anthologies speculates on people's efforts to 'make sense of a changing world.' The contributors don't necessarily assume that humans will find it easy or even possible to cope with all the changes around and within them - but they'll try, which is just part of SF's continuing dialogue about the future. The collection's strongest pieces include Robert Charles Wilson's character study of an almost-artist in search of a muse ("YFL-500"), Mary A. Turzillo's dissection of love ("Pride"), Paul Di Filippo's witty extrapolation of electronic consumerism and democracy gone berserk ("Wikiworld") and Ken MacLeod's understated, moving report on the Second Coming ("Jesus Christ, Reanimator"). All the selections in this outstanding volume prompt thoughtful speculation about what kind of tomorrow we're heading toward and what we'll do when we get there."
—Publishers Weekly Starred Review

"…so good that I suggest Pyr wait a year and republish it with the title Best Science Fiction of 2007. This is an important book that can move science fiction one step closer to the 'literature' shelf, if it so desires....Anders has coaxed such incredible goodness out of these writers that if you only read one or two stories a month, it's better than a year's subscription to most of the genre magazines out there...With a deep bench of talent and a perfectly paced setlist, Lou Anders has made made a book that truly represents its own theme. Fast Forward has the potential to be the future of short-form science fiction."
—Bookgasm.com

"Lou Anders has edited a couple of first-rate anthologies over the past few years, and with this book he initiates what one hopes will be a series of original anthologies. I enjoyed Fast Forward 1, and I certainly hope it continues for years....First rate work ... well worth reading ... on balance a pretty fine anthology."
—Rich Horton in Locus

"Presented with a nod towards the old, 'classic' sci-fi anthologies, Anders has assembled a collection of 21 fresh, forward looking views into our future. Some, like Paolo Bacigalupi's 'Small Offerings' are as frankly disturbing as they are thought provoking....Mike Resnick and Nancy Kress team up in 'Solomon's Choice' a stunning collaborative effort where one man must decide what or if the future will hold anything for a branch of humanity's offshoots....Inventive and thought provoking, with solid storylines and imaginative twists, this excellent new sci-fi collection delivers." —MonstersandCritics.com

"We're living through the Golden Age of the science fiction short story and Lou Anders' Fast Forward 1 is as good a survey of the latest, greatest and best as you could hope to find. Science fiction is not just about the future, it's about passion, about vision, about imagining tomorrow so we better understand today. Fast Forward 1 is a book that meets that challenge, and firmly establishes Anders as one of the brightest and best of the new generation of editors working in science fiction. We're lucky to have him, and to have this book, and I, for one, can't wait to see Fast Forward 2. Fast Forward 1 is a definite contender for best anthology of the year."—Jonathan Strahan, The Best Science Fiction and Fantasy of the Year

A 2008/2007 Hugo Award nominee, 2008 Philip K. Dick Award nominee, 2007 Chesley Award nominee, and 2006 World Fantasy Award nominee, Lou Anders is the editorial director of Prometheus Books' science fiction imprint Pyr, as well as the anthologies Fast Forward 2 (Pyr, October 2008), Sideways in Crime (Solaris, June 2008), Fast Forward 1(Pyr, February 2007), FutureShocks (Roc, January 2006), Projections: Science Fiction in Literature & Film (MonkeyBrain, December 2004), Live Without a Net (Roc, 2003), and Outside the Box (Wildside Press, 2001). In 2000, he served as the Executive Editor of Bookface.com, and before that he worked as the Los Angeles Liaison for Titan Publishing Group. Anders is the author of The Making of Star Trek: First Contact (Titan Books, 1996), and has published over 500 articles in such magazines as The Believer, Publishers Weekly, Dreamwatch, Deathray, Free Inquiry, Star Trek Monthly, Star Wars Monthly, Babylon 5 Magazine, Sci Fi Universe, Doctor Who Magazine, and Manga Max. His articles and stories have been translated into Danish, Greek, German, Italian, and French, and have appeared online at SFSite.com, RevolutionSF.com, and InfinityPlus.co.uk. Visit him online at www.louanders.com.