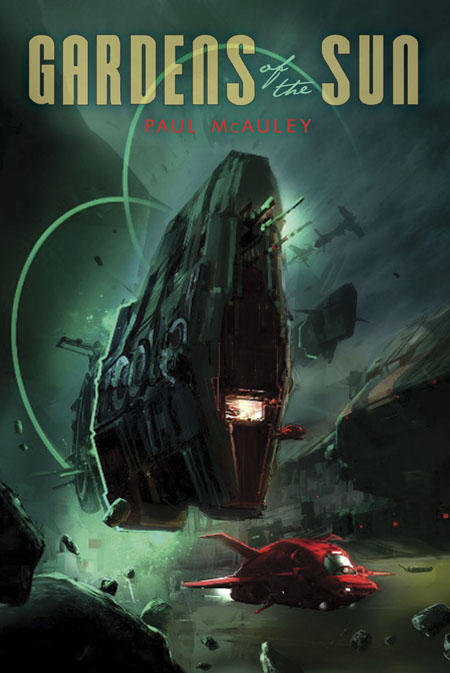 Gardens of the Sun

The Quiet War is over. The city-states of the moons of Jupiter and Saturn, founded by descendants of refugees from Earth's repressive regimes, the Outers, have fallen to the Three Powers Alliance of Greater Brazil, the European Union, and the Pacific Community. A century of enlightenment, rational utopianism, and exploration of new ways of being human has fallen dark. Outers are herded into prison camps and forced to collaborate in the systematic plundering of their great archives of scientific and technical knowledge, while Earth's forces loot their cities and settlements and ships, and plan a final solution to the "Outer problem."

But Earth's victory is fragile, and riven by vicious internal politics. While seeking out and trying to anatomize the strange gardens abandoned in place by the Outers' greatest genius, Avernus, the gene wizard Sri Hong-Owen is embroiled in the plots and counterplots of the family that employs her. The diplomat Loc Ifrahim soon discovers that profiting from victory isn't as easy as he thought. And on Earth, in Greater Brazil, the democratic traditions preserved and elaborated by the Outers have infected a population eager to escape the tyranny of the great families who rule them.

Meanwhile, in the outer reaches of the Solar System, a rag-taggle group of refugees struggle to preserve the last of the old ideals. And on Triton, fanatical members of a cabal prepare for a final battle that threatens to shatter the future of the human species.

After a conflict fought to contain the expansionist, posthuman ambitions of the Outers, the future is as uncertain as ever. Only one thing is clear. No one can escape the consequences of war—especially the victors.

"This is lively and engrossing and I liked it even better than its prequel."
—Don D'Ammassa's Critical Mass

Praise for The Quiet War:

"...The Quiet War is a very impressive novel that manages to present complex science-fiction concepts, future history, and technology with a quality of prose often missing in the genre.... McAuley's prose is graceful, almost lyrical at times, from start to finish. He understands that a successful story must speak to the spirit and heart as well as to the mind, and he deserves a great deal of credit for that."
—Rob Will Review.com

"McAuley is one of our most versatile and talented SF writers. He's created space opera in the grand tradition... he's made himself at home with the tale of the far future. Only Gene Wolfe and Jack Vance have done it as well!"
—Publishers Weekly

"The fascinating inventiveness of the bio-engineered life-forms, the intricate detail of both the societies and habitats, the complex characters all amounted to a fabulous story. This is a book that has been carefully thought out and the author displays a wealth of knowledge on subjects such as bio-remediation and terraforming. It's a tale well worth taking the time to get into and enjoying McAuley's vision of the future."
—SF Crowsnest

"The author creates a magnificent sense of gravitas and wonder as he describes conflict. The ideas expounded are genuinely fascinating and well thought out. The stage is set for war and it is beautifully handled."
—Sci Fi Now

"It's a complex, multilayered novel, almost an SF version of 'Bleak House' or 'Bonfire of the Vanities'. It's packed with great characters, breathtaking set pieces and intriguing SF ideas."
—SFX

"With restrained brilliance, McAuley takes that hardy SF perennial, the interplanetary war, and shows us how one might actually develop. This novel shows off many of McAuley's strengths—his solid plotting, his command of scientific theory, his sense of the complex moral and political implications of each advance."
—Deathray

"Combines the damn-the-torpedoes, full speed ahead narrative impetus of a Peter F. Hamilton, with the detailed, even meticulous attention to world-building and character development that distinguished Kim Stanley Robinson's classic Mars sequence. McAuley has always been a stylish writer, but he outdoes himself here. The Quiet War marks Paul McAuley's triumphant return to full-bore space opera."
—Locus

Paul McAuley's first novel won the Philip K. Dick Award and he has gone on to win almost all of the major awards in the field. For many years a research biologist, he now writes full-time. He lives in London.