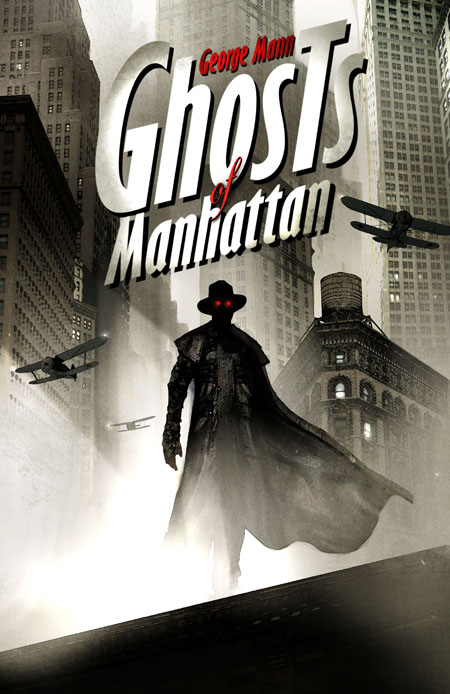 1926. New York. The Roaring Twenties. Jazz. Flappers. Prohibition. Coal-powered cars. A cold war with a British Empire that still covers half of the globe. Yet things have developed differently to established history. America is in the midst of a cold war with a British Empire that has only just buried Queen Victoria, her life artificially preserved to the age of 107. Coal-powered cars roar along roads thick with pedestrians, biplanes take off from standing with primitive rocket boosters, and monsters lurk behind closed doors and around every corner. This is a time in need of heroes. It is a time for The Ghost. A series of targeted murders are occurring all over the city, the victims found with ancient Roman coins placed on their eyelids after death. The trail appears to lead to a group of Italian American gangsters and their boss, who the mobsters have dubbed "The Roman." However, as The Ghost soon discovers, there is more to The Roman than at first appears, and more bizarre happenings that he soon links to the man, including moss-golems posing as mobsters and a plot to bring an ancient pagan god into the physical world in a cavern beneath the city. As The Ghost draws nearer to The Roman and the center of his dangerous web, he must battle with foes both physical and supernatural and call on help from the most unexpected of quarters if he is to stop The Roman and halt the imminent destruction of the city.

"I have a problem with vigilante stories most of the time, but this was clearly a comic book world and it turned out to be quite a lot of fun."
—Don D'Ammassa's Critical Mass

"Atmospheric and pleasingly enigmatic, the novel pulls us
into world of pure pulp."
—io9.com

"I lost sleep wanting to read this book... it was just huge amounts of fun."
—SF Signal

"It's a combination of genres that for me really checks all the boxes; golden age/pulp era superhero, police procedural, steampunk with more then a few nods to Lovecraft and finer literature. If F. Scott Fitzgerald were to have been a fan of weird tales this is the world he might have envisioned in an alternate universe version of The Great Gatsby... Me, I cant wait for the next installment there are not so subtle clues that there is more to come."
—Deadwood blog

"Ghosts of Manhattan is a brilliant hybrid of superhero/vigilante tale, film noir, and 1920s decadence... It is an exceedingly dark character study of damaged characters attempting to make the world a better place than it has been for them. It is a portrait of a world just one step removed from our reality, a New York that never was but could have been. It is a thematic rumination on the nature of heroism, blessed with exquisite prose, twisty mystery (one revelation in particular almost made me want to start reading all over again, to note the earlier clues), genuinely thrilling suspense, and cracking violence—a beautifully crafted novel whose dark heart is counterbalanced with small moments of unexpected tenderness. And dirigibles."
—RobWillReview.com

Praise for George Mann and The Affinity Bridge:

"Mann is at the forefront of the new generation of UK genre movers and shakers.... A writer of enormous promise."
—SF Revu

"Mann is leading the charge."
—Guardian

"A carefully plotted and entertaining steampunk mystery." —SciFi.com "[Mann] has a sharp talent for writing and a surplus of enthusiasm for the genre."
—Sci Fi Now

George Mann is the author of The Affinity Bridge, The Osiris Ritual, and The Human Abstract, as well as numerous short stories, novellas, and an original Doctor Who audiobook. He has edited a number of anthologies including The Solaris Book of New Science Fiction and The Solaris Book of New Fantasy and a retrospective collection of classic Sexton Blake stories, Sexton Blake, Detective. He lives near Grantham, UK, with his wife, son, and daughter.