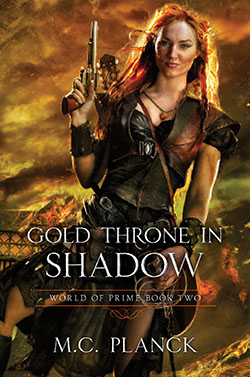 Christopher, raised from the dead and promoted to a moderate rank, takes command of the army regiment he trained and equipped. Sent south to an allegedly easy posting, he finds himself in the way of several thousand rabid dog-men. Guns and fortifications turn back the horde, but Christopher has other problems that cannot be solved with mere firepower: a wicked assassin; hostile clergymen; dubious allies including a bard, Lalania, with a connection to a mysterious group of scholars; and worst of all his own impolitic tongue. But all of these pale into mere distractions once he discovers the true enemy: an invisible, mind-eating horror who plays the kingdom like a puppet-master’s stage. Lalania claims she can help—but will it be enough?

PRAISE FOR SWORD OF THE BRIGHT LADY:

“Readers looking for a new twist on an old story will be interested in this tale of modern idealism set in a gritty medieval world.”
—PUBLISHERS WEEKLY

M.C. Planck is the author of Sword of the Bright Lady (World of Prime: Book 1) and The Kassa Gambit. After a nearly-transient childhood, he hitchhiked across the country and ran out of money in Arizona. So he stayed there for thirty years, raising dogs, getting a degree in philosophy, and founding a scientific instrument company. Having read virtually everything by the old Masters of SF&F, he decided he was ready to write. A decade later, with a little help from the Critters online critique group, he was actually ready. He was relieved to find that writing novels is easier than writing software, as a single punctuation error won’t cause your audience to explode and die. When he ran out of dogs, he moved to Australia to raise his daughter with kangaroos.