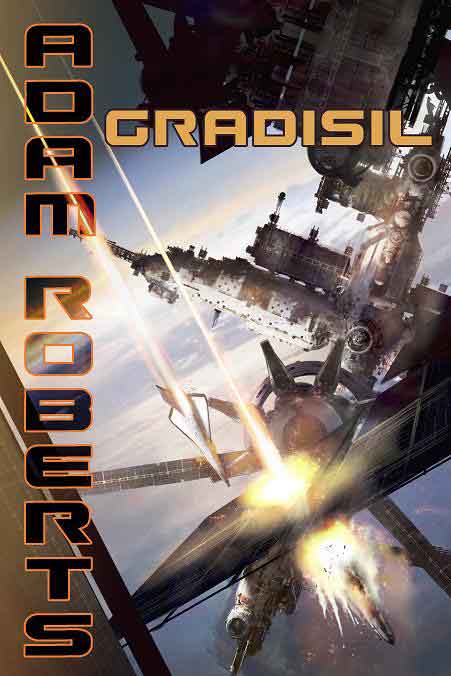 Gradisil is an epic space opera of family revenge and the birth of a nation.

Not very long from now, if you are wealthy, space can be yours, space to grow. New technology has seeded a rebirth of the pioneer spirit. A new breed of adventurer has slipped the bonds of gravity and begun a fresh life in orbit, free from interference by government, free from the petty concerns of earth.

But tradition, fear, and revenge carry a murderous weight, a gravity that is not so easy to escape. The death of Gradisil’s grandfather, floating high in the uplands above earth, was only the beginning. And now the US government is looking up at the new nation above our heads with jealous eyes.

"I have read few novels as challenging, literate, and invigorating as this one. Gradisil is like the water of life, and anyone captivated by the desire to get into space, or convinced that individual liberty goes hand in hand with our future, should find visionary solace in this excellent book....the pull of the story itself is nearly irresistible."
—Prometheus Newsletter of the Libertarian Futurist Society

"[S]hould be at the top of the reading list for anyone who likes their science fiction sprinkled liberally with realistic science and technology." (4/5 stars) —SFSignal.com

"Modeled after Aeschylus's Oresteia trilogy of Greek tragedies, it's a multi-generational saga of man's colonization of the high frontier of low-earth-orbit. It's epic SF in the vein of Kim Stanley Robinson's Mars trilogy or Allen Steele's Coyote trilogy, although it feels like it could have been written in the days of Heinlein. And perhaps most profoundly, it's a story about two Americas....Gradisil is written as if there hasn't been a dozen books and hundreds of shorts out each year since the 50s about this subject.... but therein lies the genius....It reads like watching a wide-eyed child looking up at the sky, after you've sneered at the stars in contempt for so long."
—Ain't It Cool News

"[A] picture of a possible future for at least a segment of Earth's population that is both chillingly possible and dryly tongue-in-cheek. Fans of sf sagas will appreciate the attention to detail and engaging characters."
—Library Journal

"Roberts supplies convincing details to make such a life seem almost within our grasp — his characters are flawed, cranky and driven. At times this is reminiscent of the best of Robert Heinlein — although Heinlein would not have approved of Roberts's depiction of the American military mind."
—Lisa Tuttle, The Times

"Roberts is a powerful writer who can get to the emotional core of his characters....Gradisil is [his] first novel to be published in the US. Victor Gollancz, the class-act British imprint brought us this writer years ago. Now, we're getting the chance to read Roberts' work from a US publisher, not surprisingly, Pyr. Whatever version of this novel you lay your hands on, be prepared to escape — to reality."
—The Agony Column

"The politics are convincing, the depiction of a near-future world where war is only declared once the planners know victory is assured is a credible development of the present, and the notions of a legal system that institutionalizes war, and that the practicalities of winning the war once victory is declared are the problematic thing, are fine present-into-future SF. Oh, and the digs at Dick Cheney are biting and funny. On the hard SF/mythic side, Roberts's use of Scandinavian legend as an allegory to the magnetic boost technologies he uses to put planes into orbit has the smack of an SF trope that'll become a universal cliché in a few years."
—Starburst

"Against the backdrop of Gradisil's nation-building odyssey, Roberts impressively explores a variety of themes. It all adds up to proof, if any were really needed, that Roberts belongs in the front rank of hard SF writers."
—SFX

"Never one to take a predictable line, Adam Roberts sticks the boot into rockets while singing the praises of DIY anarchism in Gradisil. Inevitably, pioneering innocence gets tied up with political imperatives, a story that Roberts deftly keeps moving beside a generational revenge tragedy."
—Daily Telegraph

"Adam Roberts captures the attention and imagination of cerebral science fiction fans with his tale of a nation in the sky formed from courage and conviction not continual conquest."
—Alternative Worlds (Harriet Klausner's review site)

"[A] complicated mixture of hard SF satire, political thriller, and family saga, told in a post-modern mélange of traditional narrative, memoir, and excerpts of speeches and the like....With its recursive references to hard SF and hard SF authors, Gradisil makes a strong commentary on the kind of technology we could have if we would only, as a society, focus more on ideas. It also indicts our Western society for what we have become....The intricacies of the plot, the richness of character development, and the intriguing scientific extrapolation....It is not surprising that it has been shortlisted for the 2007 Arthur C. Clarke award for best new novel."
—SFRevu.com