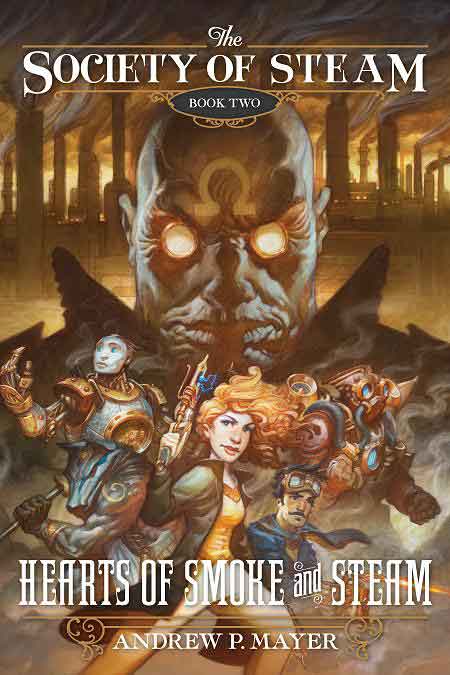 Hearts of Smoke and Steam

Sir Dennis Darby has been murdered, the Automaton has been destroyed, and Sarah Stanton has turned her back on a life of privilege and comfort to try and find her way in the unforgiving streets of New York. But Lord Eschaton, the villain behind all these events, isn't finished with her yet. His plans to bring his apocalyptic vision of the future to the world are moving forward, but to complete his scheme he needs the clockwork heart that Sarah still holds.

But she has her own plans for the Automaton's clockwork heart—Sarah is trying to rebuild her mechanical friend, and when she is attacked by the Children of Eschaton, the man who comes to her rescue may be the one to make her dreams come true. Emelio Armando is a genius inventor who had hoped to leave his troubles behind when he and his sister left Italy for a life of anonymity in the New World. Now he finds himself falling in love with the fallen society girl, but he is rapidly discovering just how powerful the forces of villainy aligned against her are, and that fulfilling her desires means opening the door to a world of danger that could destroy everything he has built.

The Society of Steam takes place in a Victorian New York powered by the discovery of Fortified Steam, a substance that allows ordinary men to wield extraordinary abilities and grants powers that can corrupt gentlemen of great moral strength. The secret behind this amazing substance is something that wicked brutes will gladly kill for, and one that Sarah must try and protect, no matter what the cost.

Praise for The Falling Machine The Society of Steam, Book One:

"If Stan Lee had lived in the 1880s, this is the book he would have written—steampunk superheroes. Filled with larger-than-life characters, cliffhanger action, and ingenious gadgets so richly realized you'll feel the steam hissing from them, at its heart, it's a two-fisted meditation on the mythic glories of heroism and the tragic frailties of the heroes themselves."
—Clay & Susan Griffith
Authors of The Greyfriar (Vampire Empire Book 1)

"Andrew P. Mayer's The Falling Machine enjoys the promise of a glorious conceit that the book delivers on—steampunk superheroes in Gilded Age New York City. The first of Mayer's Society of Steam trilogy, this book offers cocked-eyed adventure and the high camp of steampunk wrapped around a story of moral choice, family loyalty, and the ultimate question of who gets to be counted as a person. A ripping yarn that strikes all the right notes, The Falling Machine will delight and entertain you."
—Jay Lake
Campbell Award–winning author of Mainspring and Green

Andrew P. Mayer is the author of The Falling Machine (The Society of Steam, Book One). He is also the author of a short comic story titled "Om Nom Nom" published by Dark Horse Comics. The story was anthologized in Myspace Dark Horse Presents Anthology #3 and in New Creepy Anthology . He is the chief creative officer for Mob Science games where he creates social games for Facebook. Previously he worked as a game designer and creative director for Sony Psygnosis, the Cartoon Network, and PlayFirst Games.