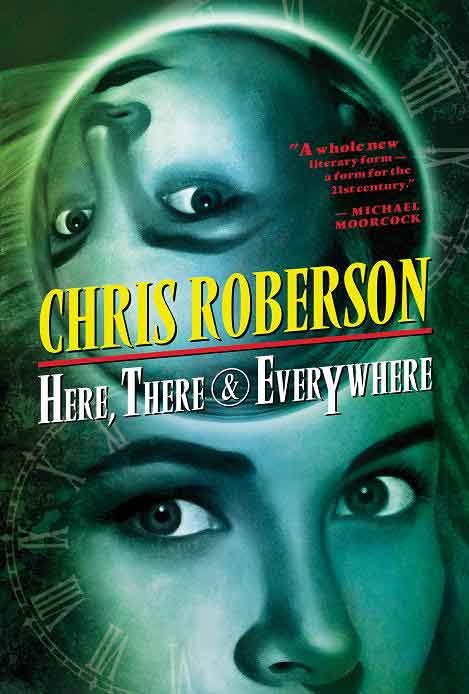 When Roxanne Bonaventure is eleven years old, a dying woman gives her a gift that changes her life utterly, making her a singular creature, with no analogue or equivalent. With the strange device called the "Sofia," she is granted the ability to travel anywhere in space and time, not only through times that were and will be, but also through the worlds that could have been and might someday be. From that day forward, no place or time can contain her, no danger can assail her, no mystery can elude her. From the deepest secrets of the past to the furthest flung visions of the future, Roxanne's life knows no boundaries except those she can imagine. But such power comes at a price: the life she might have led is forever lost to her, twisting away among the infinite threads of the Myriad. Roxanne finds herself isolated, unable to make lasting, meaningful relationships with friends, family, or strangers.

Here, There & Everywhere is the story of one woman searching for herself, and for someone with whom to share her life. It is one story, and many stories - the jigsaw puzzle of a life, from youth to old age, projected against the backdrop of everything that ever was, might have been, and may yet be. Roxanne's adventures take her from Victorian England to Ancient Egypt, from the End of Time to the birth of The Beatles. Along the way, she encounters every method of time travel theoretically possible: Visser Wormholes and Tipler Cylinders; a mysterious substance called chronium; and the slow and steady path we all take, moving forward one day at a time. And somewhere in the endlessly splitting paths of the Myriad lies the secret of Roxann

"What would you do if you could not only instantaneously travel to any time or place on Earth but could also visit an infinite number of divergent worlds? That's the crux of Chris Roberson's debut novel ... a surprisingly poignant story about one woman's wild ride through time and space in search of her place in the universe. And although time travel has been a staple for writers (and readers!) for more than 100 years, Roberson's ingenious take on the subject is like a blast of invigorating freshness into a room full of stagnant air."
—B&N Explorations

"[Roberson] displays an infectious enthusiasm for the conventions of pulp adventure fiction and sufficient wit and skill to maneuver around their pitfalls. His book is always fun, thoughtful and clever in the way it uses the latest theories about cosmology to rationalize Roxanne's multidimensional sojourns ... an enjoyable romp by a promising new voice in science fiction."
—San Francisco Chronicle

"Roberson's deceptively lighthearted take on the phenomena of time travel and alternate universes features a likable heroine whose quick mind and caring heart should appeal to adult and YA fans of sf adventure with a conscience."
—Library Journal

"Roberson's irreverent alternative histories of the Beatles, Sherlock Holmes, and H.G. Wells are a welcome stitch in the age-old time-travel tradition. Grade: B"
—Entertainment Weekly

"One of that bold band of young writers who are taking the stuff of genre fiction and turning it into a whole new literary form - a form for the 21st century."
—Michael Moorcock

"A blithe and giddy romp across the multiverse. The story of Roxanne Bonaventure, who comes into possession of a mysterious artifact permitting instant passage across all worldlines, this light-hearted tale combines the intricacies of Keith Laumer's Worlds of the Imperium (1962) with the sassiness of John D. MacDonald's The Girl, the Gold Watch & Everything (1962). Roberson threads his narratives with pop-culture brio - specifically, references to The Beatles and comics - and does not neglect his speculative physics either."
—Paul Di Filippo, Asimov's Science Fiction

"Roberson has a pop smash of a book here. Here, There & Everywhere is ingenious good fun, a delightful package of escape and entertainment starring a heroine who wears her attitude around her shoulders like a Lady Madonna."
—Walter Minkel, The New York Review of Science Fiction

Chris Roberson's critically-acclaimed short fiction has appeared in the anthologies Live Without a Net (Roc, 2003), The Many Faces of Van Helsing (Ace, 2004), and FutureShocks (Roc, 2005), with previous and forthcoming appearances in the pages of Asimov's Science Fiction, Black October, Fantastic Metropolis, RevolutionSF, Twilight Tales, Opi8, Alien Skin, Electric Velocipede, and Lone Star Stories. His writings have received positive reviews from Locus Magazine, The Magazine of Fantasy & Science Fiction, Asimov's Science Fiction, The New York Review of Science Fiction, Infinity Plus and RevolutionSF. He was a 2004 World Fantasy Award finalist and the winner of the 2003 Sidewise Award for Best Short Story.