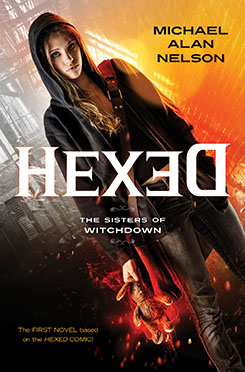 THE FIRST NOVEL BASED ON THE HEXED COMIC!

Luci Jenifer Inacio das Neves, Lucifer for short, isn't your typical teenaged girl. She's a thief who survives by stealing bad things from bad people in the magical and mystical underworld hidden beneath our own. So when a policeman's daughter, Gina, is kidnapped by a force he can't explain, Lucifer is the only one who has a chance at getting his daughter back.

With the unsolicited help of Gina's friends, including Gina's boyfriend David, Lucifer's investigation leads to the unfortunate truth of the kidnapping. Gina was taken to an otherworldly dimension by a creature of unspeakable evil: one of the Seven Sisters of Witchdown. Against all odds, Lucifer must use every magical tool hidden in her trick bag to steal her way into the Shade and bring Gina back before the Sister sacrifices her for her own dark ends. But the closer Lucifer gets to Gina, the closer she gets to David. And David to her. Lucifer must risk her life by confronting demons, witches, and the cruel demigoddess controlling her destiny - all to save the one girl who stands in the way of Lucifer finally finding love.

Praise for the Hexed comic:

“If you’re a Buffy-phile, this is definitely up your alley.”
—Ain’t It Cool News

Michael Alan Nelson was born in Portage, Indiana and grew up in a small farming community before moving to Los Angeles in 2002. He is the winner of the 2004 New Times 55 Fiction contest for his short-short "The Conspirators" and was awarded the 2011 Glyph Comics Award for Best Female Character for the character Selena from his series "28 Days Later." Michael is the author of the critically acclaimed comic series "Hexed," "Dingo," and "Fall of Cthulhu."