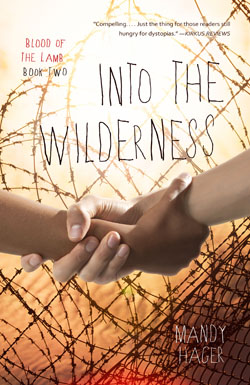 Blood of the Lamb Book Two

Award-caliber social science fiction with a strong message about race and the abuse of religious faith by those in power.

Book Two of the Blood of The Lamb Trilogy opens as Maryam, Ruth, and Joseph have fled Onewere, reluctantly taking Joseph's troublesome cousin, Lazarus, as well. They arrive at their destination, Marawa Island, filled with hope for rescue and reprieve. But at first glance the island appears to be solely populated by birds. Perhaps the Apostles' dire warnings about the fall-out of the Tribulation were true after all?

As Maryam and Joseph experience all the topsy-turvy misunderstandings and sexual tension first love entails, the antagonism between Maryam and Lazarus reaches explosive proportions. But when disaster brings the crushing realization that time is now against them, all four must decide just who they can risk turning to for help.

This trilogy opener will be just the thing for those readers still hungry for dystopias."
—Kirkus Reviews

Mandy Hager is an award-winning writer and educator based in Wellington, New Zealand. She has a drive to tell stories that matter-direct, powerful stories with something to say. She won the 2010 New Zealand Post Children's Book Award for Young Adult Fiction for The Crossing.