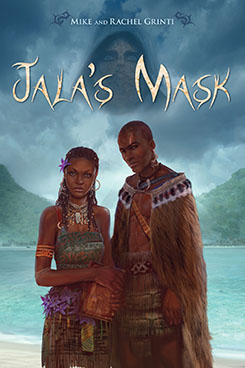 For two hundred years the people of the Five-and-One Islands have survived by raiding the mainland. By shaping the reefs around their islands into magical ships, they can cross the great ocean, take what they want, and disappear where no normal ship can follow.

When Jala meets King Azi of the Five-and-One, she forgets everything her family told her to do. She was supposed to be meek and charming. She wasn't supposed to be herself. And she wasn't supposed to fall for him. When the king defies his family and proposes to her, Jala finds herself the islands' new queen. Now she's cut off from her family and despised by the king's advisers. Even her feelings for Azi, that seemed so clear when they were alone, are anything but clear amid the politics of the islands' ruling families.

On the second night after Jala's wedding, the islands are invaded by ships arriving on a tide of magical fog. One of the islands is left in ruin. Others haven't been heard from. And there might be more invaders on the way. If Jala can convince the noble families to work together, they might stand a chance, but she must choose between her family, her love for Azi, and saving her people.

“A fresh island breeze for my imagination. If you’d like a change from the fantasy tropes of your grandparents and/or you’re a fan of island lore, Jala’s Mask is a worthwhile read.”
—Geeky Godmother

“Mike and Rachel Grinti’s Jala’s Mask takes the coming-of-age fantasy to strange and wonderful new places. The setting is unlike any fantasy world we’ve seen; it is based on African and Polynesian history and folklore, is entirely believable, and is fascinating, fresh, and unique. The result is a story that unfolds at a quickening pace, full of quirky and unexpected turns with a diverse cast of terrific characters who grow and reveal themselves as morally complex creations.”
—Clay and Susan Griffith, authors of the Vampire Empire series

Mike and Rachel Grinti are a husband-and-wife writing team. They met at a writing workshop in 2002, though they didn't start writing together until a few years later. Rachel is a children's librarian. Mike fell in love with reading after he checked out The Hobbit from his school library and has been hooked on fantasy and science fiction ever since. When he's not writing or reading, he's probably playing video games and has a day job making them.