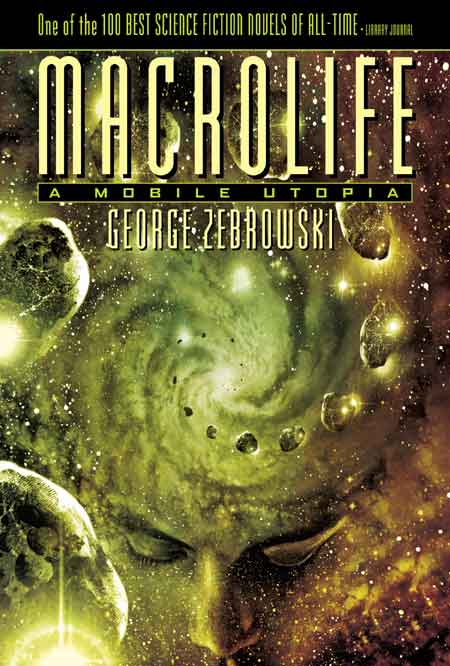 Subtitled A Mobile Utopia, this pioneering novel about the meaning of space habitats for human history, presents spacefaring as no work did in its time, and since. A utopian novel like no other, presenting a dynamic utopian civilization that transcends the failures of our history.

Epic in scope, Macrolife opens in the year 2021. The bulero family owns one of Earth's richest corporations. As the Buleros gather for a reunion at the family mansion, an industrial accident plunges the corporation into a crisis, which eventually brings the world around them to the brink of disaster. Vilified, the Buleros flee to a space colony where young Richard Bulero gradually realizes that the only hope for humanity lies in macrolife--mobile, self-reproducing space habitats.

A millennium later, these mobile communities have left our sunspace and multiplied. Conflicts with natural planets arise. John Bulero, a cloned descendant of the twenty-first century Bulero clan, falls in love with a woman from a natural world and experiences the harshness of her way of life. He rediscovers his roots when his mobile returns to the solar system, and a tense confrontation of three civilizations takes place.

One hundred billion years later, macrolife, now as numerous as the stars, faces the impending death of nature. Regaining his individuality by falling away from a highly evolved macrolife, a strangely changed John Bulero struggles to see beyond a collapse of the universe into a giant black hole.

Inspired by the possibilities of space settlements, projections of biology and cosmology, and basic human longings, Macrolife is a visionary speculation on the long-term future of human and natural history. Filled with haunting images and memorable characters, this is a vivid and brilliant work.

Zebrowski's works have been translated into eight languages; his short fiction has been nominated for the Nebula Award and the Theodore Sturgeon Memorial Award. Brute Orbits, an uncompromising novel about a future penal system, was honored with the John W. Campbell Memorial Award for Best Novel of the Year in 1999.

The Easton Press published Macrolife in its "Masterpieces of Science Fiction" series.

"Macrolife is a novel with ideas at the fore....Zebrowski's writing...is evocative from the very first sentence....a very good book, full stop."
—SFSite

"One of science fiction's most visionary - and underacknowledged - masterworks, George Zebrowski's Macrolife, has been fatefully reissued by Pyr. This 1979 classic about mobile, self-reproducing space habitats elevating humanity to a new evolutionary level is just as wildly thought-provoking today as it was almost three decades ago.... Science fiction fans who are tired of what Zebrowski calls 'print television' - novels with little or no intellectual substance, written like they were made-for-TV movies - should definitely check out this sweeping and profound look at the long-term future of humankind - a work described by Arthur C. Clarke as 'one of the few books I intend to read again.' Looking for brain food? Here's a gourmet feast from one of the genre's most sagacious writers."
—B&N's Explorations Newsletter

"LJ dubbed the Nebula-winning author's 1979 sf volume one of the genre's 100 best novels. This edition sports new illustrations, a revised intro by Ian Watson, and a new afterword by Zebrowski."
—Library Journal

"[A] visionary speculation on the long-term future of human and natural history. Filled with haunting images and memorable characters, this is a vivid brilliant work."
—The Eternal Night online

"[T]here is much to discover in this book, things you'll agree and disagree with, more than its few hundred pages would lead one to suspect. Thanks to the reprinting, new readers, and authors now have the chance to discover and explore its ideas. For me, Zebrowski, for the sheer quality of his ideas, will be one of those authors I read more of from now on."
—Strange Horizons

"This is a 2006 edition of Zebrowski's 1979 novel...with interior illustrations by Rick Sternbach, and sporting a lovely John Picacio cover. It also has a new introduction by Ian Watson and a new afterword by the author. This 27-odd year old novel has long since been hailed as a 'classic' and a 'masterpiece' and who am I to disagree? Luckily I feel no such inclination: it is an SF classic and a book which contains all the sense of wonder that truly good SF could wish for and, as Arthur C Clarke says, 'manages an extraordinary balance between the personal and cosmic elements'....[Macrolife] has held up remarkably well over time and does not seem implausible even now, even given current cosmology....I'm damn sure there's many a current writer of SF who would give their right arms to write a book that will survive as long as this one. Needless to say, recommended to all."
—Science Fact & Science Fiction Concatenation

"George Zebrowski plays the hard SF game with the net up, keeping the concrete restraints of the real world alive in the gauzy realms of fiction."
—Gregory Benford

"I recommend this book heartily to all readers . . . I would rather have one Macrolife than a dozen sickly novels of the species that currently dominates the American SF scene."
—Brian Stableford

"I'm confident that George's book is so good it doesn't need any recommendation
from me. You can quote that!"
—Arthur C. Clarke

George Zebrowski's forty books include novels, short-fiction collections, anthologies, and a book of essays. His works have appeared in all the science fiction magazines, as well as in Omni, Nature, Popular Computing, and the Bertrand Russell Society News.