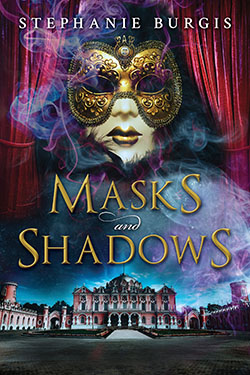 The year is 1779, and Carlo Morelli, the most renowned castrato singer in Europe, has been invited as an honored guest to Eszterháza Palace. With Carlo in Prince Nikolaus Esterházy’s carriage, ride a Prussian spy and one of the most notorious alchemists in the Habsburg Empire. Already at Eszterháza is Charlotte von Steinbeck, the very proper sister of Prince Nikolaus’s mistress. Charlotte has retreated to the countryside to mourn her husband’s death. Now, she must overcome the ingrained rules of her society in order to uncover the dangerous secrets lurking within the palace’s golden walls. Music, magic, and blackmail mingle in a plot to assassinate the Habsburg Emperor and Empress—a plot that can only be stopped if Carlo and Charlotte can see through the masks worn by everyone they meet.

“This rollicking tale is neither historical fiction nor literary retread. Recommended for readers who like their fantasy seasoned with feisty characters and nonstop action.”
—Kirkus Reviews

“This fast-paced fantasy will keep readers on the edge of their seats…the research into early-19th-century England shines through without detracting from the nimble plotting. This combination of history and fantasy is sure to please.”
—School Library Journal

“Regency romance meets Harry Potter with a strong jolt of twenty-first-century ….The lovely details—Roman baths, detailed costumes, and the seamy underside of Oxford student life—will have readers swooning all over again.”
—Booklist

”This imaginative and original series set in Regency-era England will appeal to fans of historical fiction, romance, fantasy, and adventure. Renegade Magic will leave readers clamoring for the third and final installment of Kat’s adventures."
—VOYA

Stephanie Burgis was born in Michigan, but now lives in Wales with her husband, writer Patrick Samphire, and their children. Before becoming a fulltime writer, she studied music history as a Fulbright Scholar in Vienna, Austria, and worked as a website editor for a British opera company. She has published over thirty short stories for adults. Kat, Incorrigible (US)/A Most Improper Magick (UK) won the Waverton Good Read Children’s Award in 2011 for Best Début Children’s Novel by a British writer. It was followed by Renegade Magic/A Tangle of Magicksand Stolen Magic/A Reckless Magick.