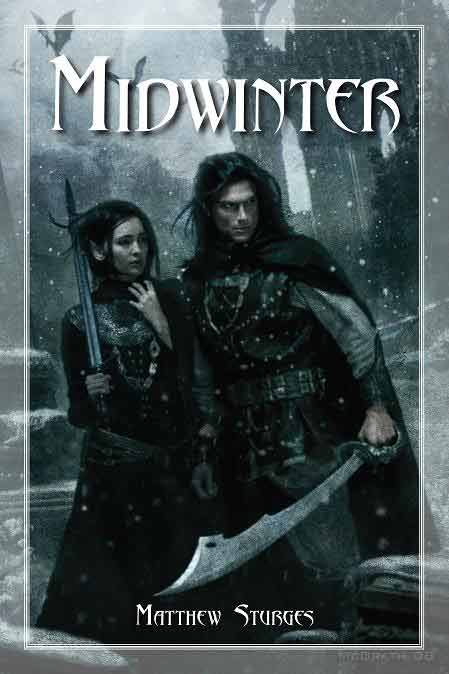 Winter comes to the land only once in a hundred years. But the snow covers ancient secrets: secrets that could topple a kingdom.

Mauritaine was a war hero, a captain in the Seelie Army. Then he was accused of treason and sentenced to life without parole at Crere Sulace, a dark and ancient prison in the mountains, far from the City Emerald. But now the Seelie Queen – Regina Titania herself – has offered him one last chance to redeem himself, an opportunity to regain his freedom and his honor.

Unfortunately, it's a suicide mission, which is why only Mauritaine and the few prisoners he trusts enough to accompany him, would even dare attempt it: Raieve, beautiful and harsh, an emissary from a foreign land caught in the wrong place at the wrong time; Perrin Alt, Lord Silverdun, a nobleman imprisoned as a result of political intrigues so Byzantine that not even he understands them; and Brian Satterly, a human physicist, apprehended searching for the human victims of the faery changeling trade.

Meanwhile, dark forces are at work at home and abroad. In the Seelie kingdom, the reluctant soldier Purane-Es burns with hatred for Mauritaine, and plots to steal the one thing that remains to him: his wife. Across the border, the black artist Hy Pezho courts the whim of Mab, offering a deadly weapon that could allow the Unseelie in their flying cities to crush Titania and her army once and for all.

With time running out, Mauritaine and his companions must cross the deadly Contested Lands filled with dire magical fallout from wars past. They will confront mounted patrols, brigands, and a traitor in their midst. And before they reach their destination, as the Unseelie Armies led by Queen Mab approach the border, Mauritaine must decide between his own freedom and the fate of the very land that has forsaken him.

"Not content with writing some of the best comic books on the shelves, Matthew Sturges has turned his amazing talents to prose fiction and the results are masterful. His prose work reminds me of Guy Gavriel Kay crossed with the audacity of Zelazny at his best."
—Bill Willingham, Eisner award-winning author of Fables

"An impressive debut....Sturges deftly works in superb character development, solid action sequences, and engaging heroes and villains, as well as an original and fascinating mythological backbone for the Fae world."
—Publishers Weekly

"With the publication of Midwinter, readers are about to discover what comic fans have learned over the past few years, and what I've known longer than any of you —namely, that Matt Sturges is one of the most talented writers working today."
—Chris Roberson, award-winning author of
Three Unbroken and End of the Century

Matthew Sturges's works include the comic book series House of Mystery, Shadowpact, Salvation Run, Countdown to Mystery, Blue Beetle, and the Eisner Award-nominated Jack of Fables, cowritten with Bill Willingham. His short stories have been published on RevolutionSF and in the anthology Live without a Net. He lives in Austin, Texas, with his wife and two daughters.