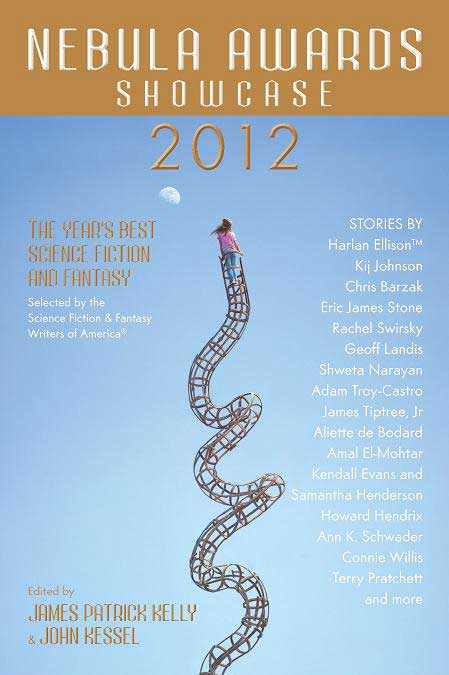 The latest volume of the prestigious anthology series, published annually across six decades!

The Nebula Awards Showcase volumes have been published annually since 1966, reprinting the winning and nominated stories in the Nebula Awards, voted on by the members of the Science Fiction & Fantasy Writers of America® . The editors selected by SFWA's anthology committee (chaired by Mike Resnick) are John Kessel and James Patrick Kelly, both highly acclaimed not only for their own award-winning fiction but also as co-editors of three anthologies: Feeling Very Strange: The Slipstream Anthology (2006), Rewired: The Post-Cyberpunk Anthology (2007), and The Secret History of Science Fiction (2010). This year's volume includes stories and excerpts by:

"From the cover by Nebula-winning artist Michael Whelan to the very last page, this remarkable anthology is filled with the very best of the SF and fantasy published in 2010.... All the inclusions are outstanding works of fiction."
- Publishers Weekly starred review

"Attesting to the high quality of contemporary imaginative fiction, this is an important tool for readers' advisory, collection development, and expanding readers' sf and fantasy horizons."
- Library Journal

"...if [this] represents the genre as it stands today, the future has never been brighter....these stories are singularly brilliant and immensely creative."
- San Francisco Book Review

John Kessel teaches creative writing and American Literature at North Carolina State University in Raleigh. He has been nominated nine times for the Nebula Award and has won twice, for the novelette "Pride and Prometheus" and the novella "Another Orphan," and he has also won the Theodore Sturgeon, Locus, James Tiptree Jr., and Shirley Jackson Awards. Kessel co-edited the anthologies Feeling Very Strange and The Secret History of Science Fiction with James Patrick Kelly. His collection The Baum Plan for Financial Independence and Other Stories was published in 2008.