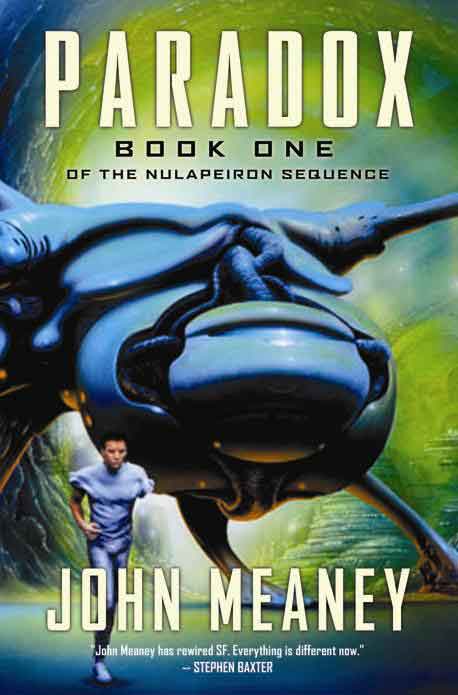 Book One of the Nilapeiron Sequence

Centuries of self-imposed isolation have transformed Nulapeiron into a world unlike any other - a world of vast subterranean cities maintained by extraordinary organic technologies. For the majority of its peoples, however such wonders have little meaning. Denied their democratic rights and restricted to the impoverished lower levels, they are subjected to the brutal law of the Logic Lords and the Oracles, supra-human beings whose ability to truecast the future maintains the status quo.

But all this is about to change.

In a crowded marketplace a mysterious, beautiful woman is brutally cut down by a militia squad's graser fire. Amongst the horrified onlookers is young Tom Corcorigan. He recognizes her. Only the previous day she had presented him with a small, seemingly insignificant info-crystal. And only now, as the fire in the dying stranger's obsidian eyes fades, does he comprehend who - or what - she really was: a figure from legend, one of the fabled Pilots.

What Tom has still to discover is that his crystal holds the key to understanding mu-space, and so to freedom itself. He doesn't know it yet, but he has been given a destiny to fulfill - nothing less than the rewriting of his future, and that of his world...

Spectacularly staged, thrillingly written and set in a visionary future, Paradox places John Meaney at the forefront of science fiction in this new century.

"...[a] rich, complex, baroque novel ... recognizable from the outset as a unique milestone in the SF field ... this book is so cleverly and knowingly respectful of its predecessors, and so resonant with past masterpieces, that veteran readers will find themselves nodding sagely at various points, saying, 'Yes, yes, I can see his inspiration here, or the source of that homage.'... Meaney's sizable talents are a melting pot in which all these various influences boil down to their constitutent story elements and are reforged into a coherent vision. The result? A landmark work.... The fate of Tom is always both emotionally involving and intellectually stimulating. The issues of social justice raised are dealt with intelligently and vitally. And the amount of genuine SF speculation, incorporating up-to-date science, is impressive....This book illustrates how powerful the SF mode remains, after a century of use, as an instrument of adventure narrative, philosophical discourse and cognitive estrangement....Pyr is a brand-new publisher helmed by editor Lou Anders, who has exhibited his skills and tastes prior to this as compiler of excellent original anthologies and as editor of the impressive but short-lived magazine Argosy. Taking Meaney's book as a sample of the high-quality work Anders intends to publish, Pyr seems destined to become a leading imprint in the field."
—Science Fiction Weekly/SciFi.com

"What we have here...is two novels [Paradox and Context] of a three novel sequence that attempts to be both literary and thematically quite sophisticated and mimetic, unlike space opera, without being anything more or less than science fiction period, and for my money succeeds....[T]his is science fiction for people who read science fiction."
—Asimov's Science Fiction

"[Paradox] has some fantastic prose, packed tight with short, punchy sentences and well-described action. It has three-dimensional characters aplenty, and complex personal dilemmas for Tom. It's intelligent in a gripping sort of way, and it doesn't infodump....It's a story I'd be quite prepared to read more of."
—Infinity Plus

"The first important new SF writer of the 21st century."
—The Times