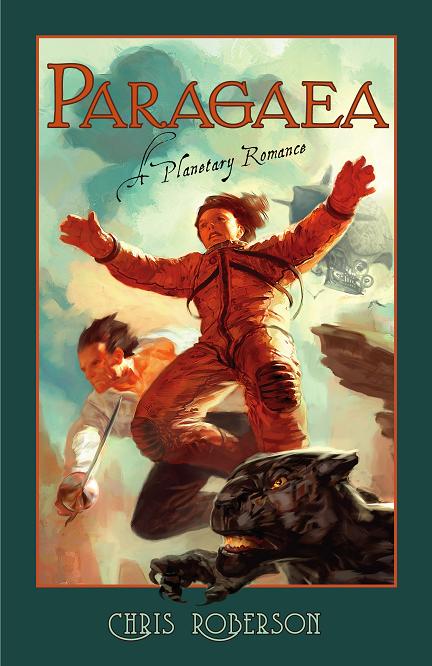 Paragaea: A Planetary Romance is the story of Akilina "Leena" Chirikov, who shortly after launching from Star Town in the Soviet Union, finds herself thrown into another dimension, a world of strange science and ancient mystery. There she meets another time-lost person from Earth, Lieutenant Hieronymus Bonaventure of the Royal Navy—who left home to fight the forces of Napoleon and never returned—and his companion, Balam—outlaw prince of the jaguar men. Bonaventure is interested only in adventure and amusement, while Balam only wants distraction until the day he can reclaim his throne. Having little better to do, they agree to help Chirikov find a way home.

In the tradition of the planetary romances of Edgar Rice Burroughs and Leigh Brackett, Paragaea is in fact a "hard" science fiction adventure, grounded in the latest thinking in the fields of theoretical physics, artificial intelligence, genetics, and more. There is a rigorously rational explanation behind all of the unearthly elements, with most of the "magic" the protagonist encounters being the products of a forgotten, transhuman, post-singularity culture that has long since disappeared. Chirikov, a strictly rational Soviet cosmonaut, interprets these as best she can, using the framework of early 1960s science. Being a dutiful Soviet, she wants only to return home to Earth, to inform her superiors about what she has discovered. But she soon finds herself developing ties to her companion Bonaventure that make her wonder whether she really wants to go home at all.

"This was a fabulous book — one that I enjoyed from the first word to the last. Having read a couple of Roberson's books I think he is a very talented author and I look forward to reading more of his work in the future."
—www.eternalnight.co.uk

"[An] entertaining speculative novel of lost races and time travelers....Roberson's style, in the best pulp manner, favors enthusiastic exposition and travelogue with dashes of swashbuckling. His colorful characters and setting transport readers to a simpler era when every story offered new worlds to explore."
—Publishers Weekly

"Roberson has certainly learned a lot from his literary ancestors, and he manage
to hit all the high notes perfectly....[T]he illusion of being cast away in some exotic
realm that combines the best elements of Jack Vance, The Arabian Nights and a hundred other glorious pulp adventures will linger in the lucky reader's mind
throughout the tale, and long after."
—Science Fiction Weekly

"Paragaea is an old tale told to a modern audience. It's a classic John Carter of Mars type tale set on a strange alien planet, with strange new creatures both hostile and friendly. It's got heroes and monsters, swords and guns, high technology and low. At the core is a small plucky cosmonaut desperate to fulfill her mission and report back to her superiors after her ship is plucked out of orbit and deposited on the not-quite Earth named Paragaea....The book ends with possibilities for continued adventurers; a possibility I look forward to. Oh, and it has zeppelins! How can you turn down a book with perky cosmonauts, super-science, cat-men, and zeppelins!"
—SFRevu.com

"[A] good old-fashioned adventure yarn set in a land full of ancient histories, myth, legends and diverse cultures...an inventive adventure tale with the kind of twists and turns you don't see coming, and when they seem a touch predictable it is written in such a way that it compliments the story's plot development. The book is well paced and successfully motivates the reader as the mysteries of the world of Paragaea start to fall into place as the characters proceed with their quest....an enjoyable, well written and an engaging fantasy adventure with a consistently developing story."
—Science Fact & Science Fiction Concatenation

"Two more US titles made my top ten this year, Crossover by Joel Shepherd and Paragaea by Chris Roberson.... Chris Roberson's Paragaea is a wonderful homage to the planetary romances of authors like Edger Rice Burroughs and features a Russian cosmonaut who crashes on an alternate world and ends up adventuring with a Napoleonic era British naval officer and a humanoid Jaguar man. Retro in every sense of the word, this is a wonderful story, beautifully realised and hugely entertaining."
—Waterstone's Bookclub (UK)

"So here's what's really delectable about this novel. Beneath the good-time pulp fiction plotting and exterior, readers will get the thrill of discovering some meaty science fictional speculations. Roberson has managed to offer us up a double-edged sword—
cutting-edge science with trailing-edge plotting. This is precisely what we live for
here at The Agony Column."
—The Agony Column

"Brings Edgar Rice Burroughs and Alex Raymond into the 21st century. Paragaea is nothing less than the great old pulp adventure stories, made new with the considerable modern skills of Chris Roberson."
—Mike Resnick, Hugo and Nebular Award-winning author
of Kirinyaga and Starship: Mutiny

"One of that bold band of young writers who are taking the stuff of genre fiction and turning it into a whole new literary form - a form for the 21st century."
—Michael Moorcock