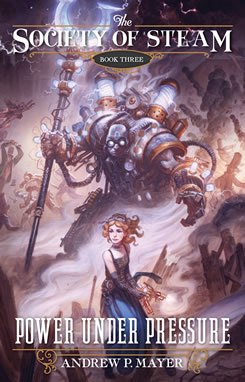 The Society of Steam Book Three

The Society of Paragons is gone—destroyed from within by traitors and
enemies. With the death of The Industrialist and the rebirth of the Iron-Clad as a monstrous half-human creature known as "The Shell," Lord Eschaton now has almost everything he needs to cover the world in fortified smoke and rebuild it in his image—everything except for the mechanical heart of the Automaton.

The device is nearer than he knows. Just across the East River, hiding in a Brooklyn Junkyard, Sarah Stanton is trying to come to restore the mechanical man to life. But before she can rebuild her friend, she must first discover the indomitable power of her own heart and save herself. Only thenwill she be able to forge a ragtag group of repentant villains, damaged Paragons, and love-mad geniuses into the team of heroes known as "The Society of Steam."

Praise for The Society of Steam:

"If Stan Lee had lived in the 1880s, [The Falling Machine] is the book he would have written—steampunk superheroes. Filled with larger-than-life characters, cliff-hanger action, and ingenious gadgets so richly realized you'll feel the steam hissing from them, at its heart, it's a two-fisted meditation on the mythic glories of heroism and the tragic frailties of the heroes themselves."
—Clay Griffith and Susan Griffith
Authors of the Vampire Empire trilogy

"[A] glorious conceit . . . steampunk superheroes in Gilded Age New York City. [The Falling Machine] offers cocked-eyed adventure and the high camp of steampunk wrapped around a story of moral choice, family loyalty, and the ultimate question of who gets to be counted as a person. A ripping yarn that strikes all the right notes, [it] will delight and entertain you."
—Jay Lake
Campbell Award–winning author of Mainspring and Green

Andrew P. Mayer is the author of The Falling Machine and Hearts of Smoke and Steam, books 1 and 2 of the The Society of Steam trilogy. He is also the author of a short comic story titled "Creepy: Om Nom Nom" published by Dark Horse Comics that was anthologized in Myspace Dark Horse Presents, vol. 3, and in New Creepy Anthology. He is the chief creative officer for Mob Science games, where he creates social games for Facebook. Previously he worked as a game designer and creative director for Sony Psygnosis, the Cartoon Network, and PlayFirst.