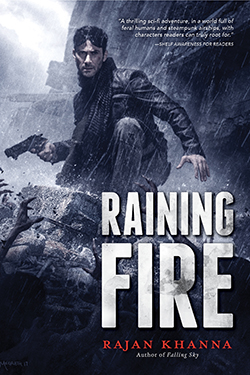 Ben Gold, former airship pilot has lost everything: his airship, his friends, and Miranda, the woman he loves. All that he has left is a thirst for revenge, a reckless plan to sate it, and some journal entries from Miranda to help ground him in the chaos. As he spirals out of control, he must survive old friends, new enemies, and of course Ferals, the mindless, violent victims of the global pandemic that shattered the world.

Meanwhile, the Cabal, a group of scientists on the floating city of Valhalla, are using the disease as a weapon while the militant Valhallans continue their raiding and destruction across the continent. When raiders from Valhalla massacre a town of innocents, Ben finds a new purpose in doing anything he can to undermine their power.

Ben must reunite with old friends and find new ones if he is to succeed. Can he overcome the forces arrayed against him in time to save himself—and maybe the world?

PRAISE FOR RISING TIDE:
“A welcome voyage for fans of zombie, post-apocalyptic and steampunk fiction…Rajan Khanna delivers a thrilling sci-fi adventure, in a world full of Feral humans and steampunk airships, with characters readers can truly root for.”
—Shelf Awareness for Readers

“A fast paced post-apocalypse steampunk adventure…. If you like your adventure with guns and airships plus a little romance, then this is the series for you!”
—Bull Spec

“Exciting…[Khanna’s] worldbuilding remains solid and unsettling, and he never loses sight of the human element. The cliffhanger ending is sure to leave readers on the edges of their seats, panting for resolution.”
—Publishers Weekly

“Thank you Rajan Khanna for a strong and intelligent woman who can hold her own, no matter the situation…there had better be a continuation to this series. I’ve just got to know what happens next!”
—Geeky Godmother

PRAISE FOR FALLING SKY:
“A cool world with steampunk and zombies combined…. The voice is very real and gritty and I felt immersed in the world. Abercombie-edgy and a quick read at that.”
—FELICIA DAY

Rajan Khanna is the author of Falling Sky and Rising Tide. A writer, narrator, and blogger, his columns and articles regularly appear on Tor.com and LitReactor.com. He has narrated fiction for markets such as Podcastle, Escape Pod, Starship Sofa, Lightspeed Magazine, and Beneath Ceaseless Skies. His short fiction has appeared in Lightspeed Magazine, Beneath Ceaseless Skies, and several anthologies including The Way of the Wizard and Dead Man’s Hand (both edited by John Joseph Adams).