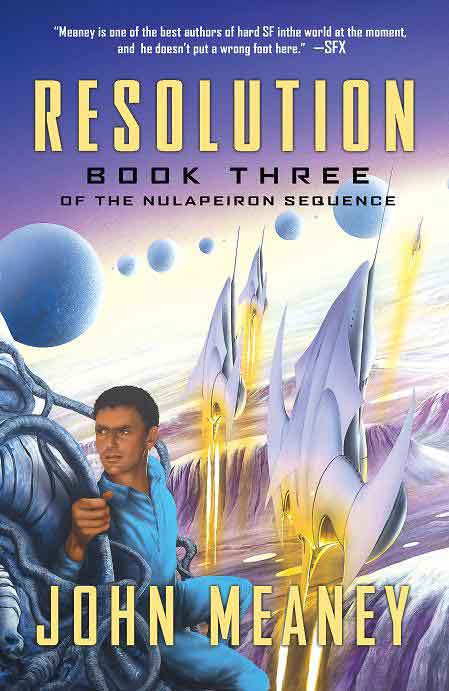 Book Three of the Nulapeiron Sequence

The war against The Blight is over, and the subterranean realms of Nulapeiron have a chance for peace. But Tom Corcorigan, revolutionary and war hero, newly married and longing for the quiet life, knows that a greater force threatens his world: the planet-consuming Anomaly, which has absorbed billions of humans and alien beings into itself.

Tom's association with the disembodied Eemur's Head, the flensed and bloody remains of a powerful Seer, changes him into something more than a poverty-stricken Lord. The spacetime-warping science of Seers and Oracles penetrates the heart of reality, bringing new enemies and allies into Tom's life. And his "story crystal," a gift from a mysterious mu-space Pilot, reveals more of the Pilots' history and true nature, and the existence of their home in a universe no ordinary human being can experience: the strange, shifting, living fractal city that is Labyrinth.

Soon the Anomaly, an evil far more powerful than its offspring Blight, rips into the world, decimating the human realms. Among the free humans who survive in the floating terraformer spheres of Nulapeiron's skies, only the forces commanded by Tom Corcorigan have a chance against this omnipotent invader. For only a Warlord who is no longer human, who is willing to sacrifice everything, can deliver humanity from darkness.

Resolution concludes the trilogy of Nulapeiron tales featuring Tom Corcorigan, bringing the story to a triumphant climax and revealing the devastating secret of the Oracles' creation.

"British author Meaney brings his ambitious saga exploring the nature of space and time to a triumphant conclusion....Fascinating and highly detailed, this third volume of Meaney's SF epic pulls all the various characters and their time lines together for an emotionally and intellectually satisfying finale."
—Publishers Weekly

"Meaney's Nulapeiron Sequence is, simply put, a hard science fiction masterpiece. And although the plotlines are powered by some highly cerebral subject matter...the story succeeds in large part because of the sheer magnetism of Tom Corcorigan, arguably one of the most complex—and paradoxical—protagonists ever created in the genre."
—Barnes &Noble's Explorations SF Newsletter

"Meaney is one of the best authors of hard SF in the world at the moment, and he doesn't put a wrong foot here."
—SFX

"Immensely satisfying . . . a genuinely impressive trilogy, which also shows how an already impressive author can grow his work."
—Starburst

John Meaney is the author of four novels——To Hold Infinity, Paradox, Context, and Resolution, the latter three titles comprising his critically-acclaimed Nulapeiron Sequence. He also has numerous short-fiction publication credits. His novelette "Sharp Tang" was short-listed for the British Science Fiction Association Award in 1995. His novella "The Whisper of Disks" was included in the 2003 edition of The Year's Best Science Fiction: Twentieth Annual Collection, edited by Gardner Dozois. His novella "The Swastika Bomb" was reprinted in The Best Short Science Fiction Novels of the Year (2004), edited by Jonathan Strahan. His story "Diva's Bones" was reprinted in The Year's Best Fantasy 5, edited by David G. Hartwell and Kathryn Cramer. Meaney has a degree in physics and computer science, and holds a black belt in Shotokan Karate. He lives in England.