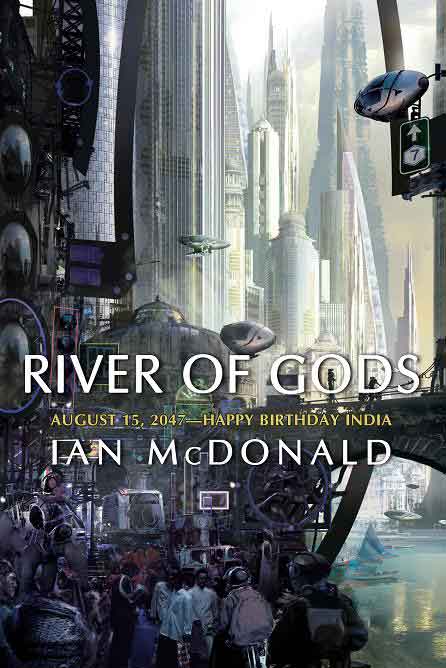 As Mother India approaches her centenary, nine people are going about their business — a gangster, a cop, his wife, a politician, a stand-up comic, a set designer, a journalist, a scientist, and a dropout. And so is Aj — the waif, the mind-reader, the prophet — when she one day finds a man who wants to stay hidden.

In the next few weeks, they will all be swept together to decide the fate of the nation.

River of Gods teems with the life of a country choked with peoples and cultures — one and a half billion people, twelve semi-independent nations, nine million gods. Ian McDonald has written the great Indian novel of the new millennium, in which a war is fought, a love betrayed, a message from a different world decoded, as the great river Ganges flows on.

"[I]f you can stand the initial shock of a future India, described in breathtaking detail by McDonald, then you will find yourself immersed in the world that he has created. River of Gods is a rich, fascinating novel….fans of hard science
fiction will find plenty to like."
—SciFiNow Magazine

"Every so often there comes along a novel, William Gibson's Neuromancer, say, or China Miéville's Perdido Street Station, or Richard K. Morgan's Altered Carbon, that seems to do it all. Extrapolation, a sense of wonder that grabs you by the throat and won't let go, lush carpets of setting, a profusion of ideas, complex representations of characters, soundings of society at every level, all the resources of language. River of Gods is such a novel."
—James Sallis, The Magazine of Fantasy & Science Fiction

"That River of Gods deserves your attention goes without saying. Since Ian McDonald won the John W. Campbell award for best new writer back in the mid eighties, he's won a Locus award...a Philip K. Dick award...and won or been nominated for a host of other awards. River of Gods itself won the British Science Fiction Association's Best Novel award in 2004. So take it as a given that if you haven't read River of Gods, you should have already, and what are you waiting for? ...River of Gods is a complex, architectonic novel of great complexity....what McDonald has done, and what creates the meaning and importance of the novel is this: River of Gods is a work of mature science fiction, presented in a new context....[It] takes ideas introduced elsewhere and develops them to a rich and logical extent....The result is a layered, philosophical work. Read it. Enjoy it. Visit River of Gods."
—The New York Review of Science Fiction

"[A] literary masterpiece.... I can't think of a better science fiction novel I've read in years...This novel is a masterpiece of science fiction by any meaningful standard ...[a] wonderfully complex novel....McDonald takes the reader to a level of immersion in the fine detail, texture, consciousness, pop culture, very being, of an extrapolated non-Western culture that is utterly awesome."
—Asimov's Science Fiction

"[A] bold, brave look at India on the eve of its centennial, 41 years from now. MacDonald has become increasingly popular in recent years, and it's easy to see why in this novel, his first to earn him a Hugo nomination....MacDonald takes his readers from India's darkest depths to its most opulent heights, from rioting mobs and the devastated poor to high-level politicians and lavish parties. He handles his complex plot with flair and confidence and deftly shows how technological advances and social changes have subtly changed lives. River of Gods is a major achievement from a writer who is becoming one of the best sf novelists of our time."
—Washington Post

"River of Gods...is...perhaps [Ian McDonald's] most accomplished novel to date. It's a dense and sometimes difficult read, reminiscent of William Gibson in full-throttle cultural-immersion mode, packed with technical jargon, religious and sociological observation and allusions to art both high and low. But River of Gods amply rewards careful consideration and more than delivers its share of straight-ahead entertainment. Already a multiple-award nominee following its British publication, McDonald's latest ranks as one of the best science fiction novels published in the United States this year."
—San Francisco Chronicle

"Ian McDonald's newest novel is one of the best blends of literary and science fiction writing I've read. River of Gods is full of the descriptive writing that permeates literary novels....McDonald unveils the plot in flashes of evocative phrasing.... But the novel's true richness comes from offering an immersion in Hindu and Muslim mythology and social norms....a realistic vision of a future driven by technology."
—San Antonio Express-News

"An ambitious science fiction thriller set in a futuristic India that is fabulously rewarding....in terms of risk-taking, sheer scale, ideas, detail, inventiveness, and intellectual scope there are few recent books to match River of Gods, and as a novel about India, there is nothing like it....[It's] not just the definitive thriller set in India but the most richly imaginative thriller about India."
—The Hindu (India's National Newspaper)

"Ian McDonald's River of Gods has already won the BSFA 2005 Best Novel Award; now it finally comes to U.S. shores in a beautifully designed package from Pyr, featuring a cover by Stephan Martiniere. McDonald throws wide the scope of characters in this one, which allows the reader to really see how far ranging the story is that he wants to tell.... an extremely rewarding novel that almost begs to be reread, with its wide swath of characters and great sense of wonder. I plan [on] diving into the river again."
—SffWorld.com

"This ambitious portrait of a future India from British author McDonald (Desolation Road) offers multitudes: gods, castes, protagonists, cultures....readers will become increasingly hooked as the pieces of McDonald's richly detailed world fall into place. Already nominated for both Hugo and Arthur C. Clarke awards, this is sure to be one of the more talked-about SF novels of the year."
—Publishers Weekly

"Every library should purchase this multi-textured tale of future perils and possibilities in the land of a thousand gods. Highly Recommended."
—Library Journal starred review

"Easily trumping any speculative fiction from the past couple of years, River of Gods is an exuberant leap into the future of India through the eyes of nine disparate characters. As their stories mingle and merge, McDonald not only weaves a tremendous yarn of mysteries and technological magic, but he truly illustrates the dilemmas lying in wait for humanity as we continue to leapfrog from one discovery to the next, inevitably toward a future we could never predict....readers are left needing more, despite the fact that, unlike certain doorstop-sized tomes of recent years, McDonald knows how to end a story. Revelation after revelation resolve themselves in a cascade of denouement that is at once thrilling and sorrowful, as if the author wants to stay in 2047 as much as the reader does. "
—Ryun Patterson of Bookgasm.com

"I will read anything that man writes — he is the most underappreciated genius working in the field today."
—Cory Doctorow, author of Someone Comes to Town,
Someone Leaves Town; coeditor, boingboing.net

"One of the best SF books I've read this year.."
—Iain M. Banks, The Algebraist

Ian McDonald is the author of many science fiction novels, including Cyberabad Days, Brasyl, Desolation Road, King of Morning, Queen of Day, Out on Blue Six, Chaga, and Kirinya. He has won the Philip K. Dick Award and the BSFA Award, been nominated for a Hugo Award and a Quill Book Award, and has several nominations for the Arthur C. Clarke Award. He lives in Belfast, Northern Ireland.