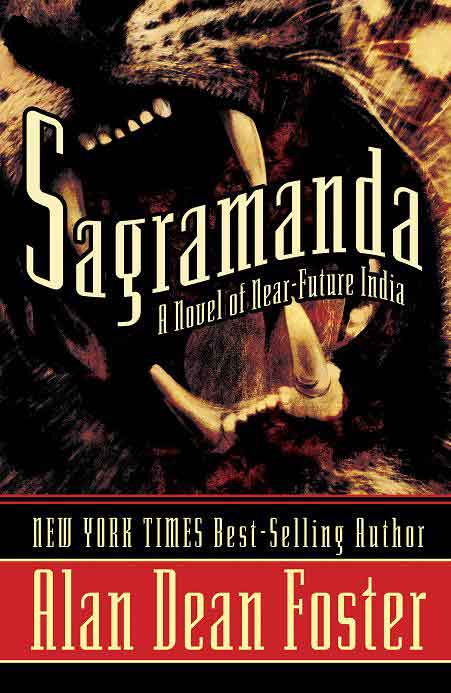 A Novel of Near-Future India

Set in Sagramanda, city of 100 million, this is the story of Taneer, a scientist who has absconded with his multinational corporation’s secret project code and who is now on the run from both the company and his father. Depahli, the fabulously beautiful woman from the “untouchable class” would die for him, just as surely as his father would like to kill him for shaming the very traditional family for such a relationship. Chalcedony “Chal” Schneemann doesn’t want to kill Taneer, if he doesn’t have to, but it wouldn’t upset him terribly much if it came to it, and he’ll stop at nothing to recover the stolen property for the company that pays him very, very well to solve big problems discreetly and quickly. Sanjay Ghosh, a poor farmer-turned-merchant in the big city of Sagramanda would like to help Taneer unload his stolen items, for the $30 million dollars his 3 percent fee is worth. Jena Chalmette, a crazy French woman pledged to Kali, simply wants to kill for the glory of her god, and she’s very good at it. Chief Inspector Keshu Singh would like to put this sword-wielding serial killer away as quickly as possible before the media gets a hold of the story.

Then there’s a man-eating tiger, come in from the nearby jungle reserve and just looking for his next meal.

A fast-paced and gripping techno-thriller set in an India just around the corner from today.

“[Foster’s] prose is frequently divine, full of apt phrases and neat similes…
.this book is a pleasure to read….if you fancy a fast-paced,
very readable techno-thriller, this is it.”
—SFCrowsnest

“Sagramanda is by far the best thing [Alan Dean Foster has] written thus far, a chef d’oeuvre for sure, and what’s more, colorful, exotic, and reasonably action-packed, too….All these threads start separately and stepwise weave together to come to a quite satisfying plot, theme, and character apotheosis at the very end, and along the way Foster paints a very detailed, sensorily vivid, culturally and technologically convincing, portrait of his extrapolated India via characters who come alive with psychological depth. What more can you ask of a science fiction novel?”
—Asimov’s Science Fiction

“Alan Dean Foster...displays his versatility and ingenuity in Sagramanda, a near-future techno-thriller set in an Indian metropolis of 100 million inhabitants....Some readers may suspect that Sagramanda suffers in comparison with another recent near-future thriller set in India, Ian McDonald's River of Gods, also published by Pyr. Both use purloined technology as a major plot device and present multiple viewpoints from a large cast of characters. Foster's approach to the material is more direct than McDonald's, but his eye for telling and exotic detail is sharp, and his instincts for constructing a gripping story line are sure. India is vast, and the subcontinent's potential influence on this century shouldn't be a subject restricted to only one science fiction writer at a time.”
—San Francisco Chronicle

“Welcome to the world of tomorrow. The world of Sagramanda. Here you'll see personal air cars, automated taxis, holographic entertainment sets and more! You'll see sprawling cities of hundreds of millions, meet the fabulously rich, the heartbreakingly poor, and the breathtakingly beautiful....What? You've already seen all that? It's already available in the RetroFuture you grew up with? Fine. But what if I told you that the face of the future looked nothing like the Golden Age of your childhood? What if I told you that Alan Dean Foster's new novel takes recent news and extrapolates it to see what the new future really looks like? Because it does, and the new world of tomorrow turns out to be the world of India....Alan Dean Foster is a master of creating alien worlds for his protagonists to deal with, but his near future India is more complex and alien than anything he's attempted yet.”
—SFRevu

“A unique blend of thriller and science fiction evolves, set in an India of the far future and providing science fiction fans with satisfying adventure.”
—The Bookwatch & Internet Bookwatch

"Wonderful depiction of Indian culture; fast-paced; entertaining characters and back stories; excellent finish.... BOTTOM LINE: A fine near-future thriller and a fun, engrossing read. There is no one main character in Sagramanda besides the city itself, which is wonderfully full of culture and cool tech like personal air cars, control bracelets, electric rickshaws, a virtual-reality Kama Sutra, personal tech and such...a fine thriller and a fun, engrossing read. MY RATING: 4 Stars”
—SFSignal

“[O]ne of the best portrayed future cities I have seen in a while. With Sagramanda, Alan Dean Foster continues to show his wonderful talent with story, character, and setting. As a complex story told from multiple viewpoints, Sagramanda does explore the future of India in an eye-opening manner and ends with a satisfying bang. I would recommend that you put this one on your reading list.”
—BlogCritics Magazine

"They say a picture paints a thousand words - in the case of Sagramanda this is most definitely reversed with the many thousand words blending beautifully together to paint a picture of a frenetic, bustling city. Absolutely superb!” —www.eternalnight.co.uk

“[A] fast-paced urban adventure set in a near-future India of high technology and desperate people. The prolific author of the Pip and Flinx novels ... adds to his considerable body of work with this polished hybrid of page-turning action and taut suspense that belongs in large collections.”
—Library Journal

"SF elements make colorful window dressing for this unpredictable thriller, whose multiple threads Foster juggles like the professional he is."
—Publishers Weekly

“Alan Dean Foster gets down, dirty and sweaty in near-future India. Sagramanda is a city with a population bigger than many entire nations and this fast-paced tech-thriller is a penthouse-to-pavement panorama of this vast, thrilling country and an important part of the growing swell of writers realising we may be living in the Indian Century.”
— Ian McDonald, award-winning author of River of Gods

“Foster is the modern day Renaissance writer, as his abilities
seem to have no genre boundaries.”
—Midwest Book Review

Alan Dean Foster has written in a variety of genres, including hard science fiction, fantasy, horror, detective, western, historical, and contemporary fiction. He is the author of the New York Times best seller Star Wars: The Approaching Storm and the popular Pip and Flinx novels, as well as novelizations of several films including Star Wars, the first three Alien films, and Alien Nation. His novel Cyber Way won the Southwest Book Award for Fiction in 1990, the first science fiction work ever to do so. Foster and his wife, JoAnn Oxley, live in Prescott, Arizona, in a house built of brick that was salvaged from an early-twentieth-century miners’ brothel. Visit him online at www.alandeanfoster.com.