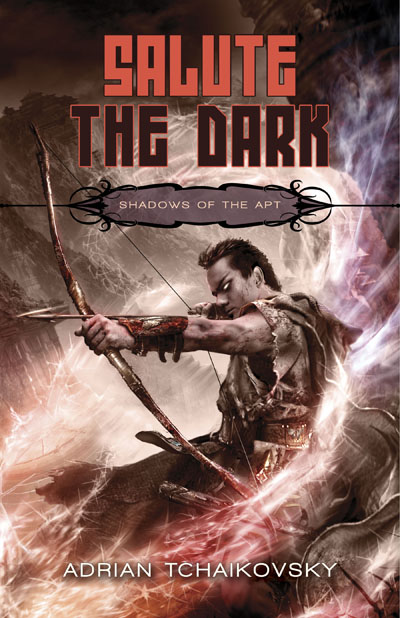 Shadows of the Apt 4

The vampiric sorcerer Uctebri has at last got his hands on the Shadow Box and can finally begin his dark ritual—a ritual that the Wasp-kinden Emperor believes will grant him immortality—but Uctebri has his own plans for both the Emperor and the Empire.

The massed Wasp armies are on the march, and the spymaster Stenwold must see which of his allies will stand now that the war has finally arrived. This time the Empire will not stop until a black and gold flag waves over Stenwold's own home city of Collegium.

Tisamon the Weaponsmaster is faced with a terrible choice: a path that could lead him to abandon his friends and his daughter, to face degradation and loss, that might possibly bring him before the Wasp Emperor with a blade in his hand—but is he being driven by Mantis-kinden honor, or manipulated by something more sinister?

“I can’t recommend this series enough and this ending is extremely satisfying.”
—UC Review, The Weekly Press

“I'll start off by saying I thought this was the best book of the series so far, and definitely in my top 10 books of the year.… I liked how each character was treated, and how Tchaikovsky treated each character's story. I think his writing is great now, and he is really in command of the story and where he wants to take it.…I will close by re-iterating that this series is in my top 5 now. This book has 31 chapters, and Chapter 30 might be the single best chapter I have read in years. There were so many emotional ups and downs, the writing and the story were perfect...just as good as fantasy gets. That chapter is so good, I would recommend reading the first 3 books and the first 29 chapters of book 4, just so you can read chapter 30. Sounds crazy, but if you read it, you'll know what I mean. If you are on the fence about this series, you've really gotta give it a shot.
—Genre Reader blog

"Salute the Dark fulfills the promise of the Apt series and brings
its first part to an excellent conclusion, while starting new threads to be
explored next. An A++ based on my three reads of the book so far and
vaulting to the top of my 2010 fantasy novels."
—Fantasy Book Critic

"The story is not an unfamiliar one but the setting is cleverly done and has been the strongest element in the novels to date, although this latest is also filled with enough adventure, plots, and derring do to satisfy even the most jaded fantasy fan."
—Don D'Ammassa's Critical Mass

"Empire in Black and Gold is a very strong debut. It is a fast-paced and action-driven novel that nonetheless leaves plenty of room for character-development. Its primary strength is, however, the highly imaginative world that Tchaikovsky's has created.... A remarkably strong fantasy debut and I for one am eagerly anticipating the sequels Dragonfly Falling and Blood of the Mantis."
—Book Spot Central

"Empire in Black and Gold has enough going for it to make it one of the most enjoyable books that I've read so far this year. I want more and there's nothing I can do but sit it out and wait..."
—Graeme's Fantasy Book Review (nine and a quarter out of ten)