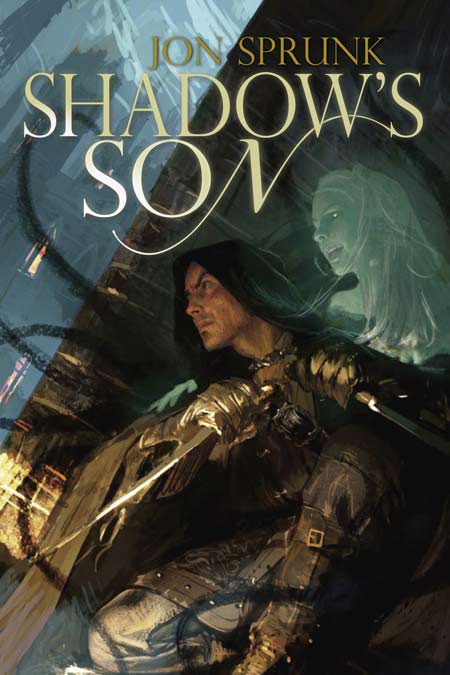 In the holy city of Othir, treachery and corruption lurk at the end of every street, just the place for a freelance assassin with no loyalties and few scruples.

Caim makes his living on the edge of a blade, but when a routine job goes south, he is thrust into the middle of an insidious plot. Pitted against crooked lawmen, rival killers, and sorcery from the Other Side, his only allies are Josephine, the socialite daughter of his last victim, and Kit, a guardian spirit no one else can see. But in this fight for his life, Caim only trusts his knives and his instincts, but they won't be enough when his quest for justice leads him from Othir's hazardous back alleys to its shining corridors of power. To unmask a conspiracy at the heart of the empire, he must claim his birthright as the Shadow's Son....

"It is just straight up, old fashioned sword and sorcery. The type of tale that makes for great reading after a long, brain-straining day at work. You can just curl up with Shadow's Son and be entertained. Nothing showy, nothing flashy, just good, solid storytelling, an interesting character, a foe to be fought and a damsel to be saved. Readers of Michael Moorcock or Robert Howard will see their effect on Sprunk's writing. I loved it, and am eagerly anticipating the sequel."
—Grasping for the Wind


"This fantasy is filled with lots of action and suspense. There are plenty of assassinations and fight scenes for those who crave a bit more action in their fantasy. Caim's abilities are interesting as is the fact of his attitude towards it which will quickly grab a reader. I highly look forward to the sequel and give this novel 5 stars as it deserves keeper status. Recommend for fantasy fans of the sword and sorcery genre and fans of assassin leads." —Night Owl Reviews


"The first lines of the novel should give you a clear taste of its style since for me they were the kind that get and keep me reading without being able to put the book down unless I really must. And Shadow's Son continues in this addictive way till the end without letting the pace slack even for a moment... An A+ for the style and the series became another get/read ASAP, confirming for once the "good vibes" I had from the original announcement."
—Fantasy Book Critic, reviewed by Liviu


"Shadow's Son is attention grabbing, fast paced, and an overall stand out fantasy novel... Shadow's Son takes fantasy to its original roots with a great storyline, quick paced plot flow, some really great fight scenes and enjoyable characters...
Jon Sprunk shows that not all fantasy novels need to be doorstoppers to be good. Shadow's Son is easily one of my favorite books of 2010 and I look forward
to seeing what Sprunk can add to this trilogy."
—Fantasy Book Critic, reviewed by Cindy


"The intrigue, action scenes, and ever-more-revealing character insights are masterfully woven together in a book the reader won't want to put down... Overall, a first-rate sword-and-sorcery tale, with intriguing characters, that moves at a fast pace."
—Booklist


"The action scenes are solid and the story is fast-paced with no moments
threatening to slow things down... So the core of Shadow's Son feels solid,
with characters who come into their stride, uncover past misdeeds and surprise themselves with what they're able to accomplish."
—The Speculative Fiction Examiner, Examiner.com


"When Sprunk gets going, he writes with an energy that has to be experienced to be believed. [He] knows that if your main character is up against a wall and facing ten swordsman then the resulting fight for your life can't be written at anything other than a break neck pace. Not only does Sprunk more than deliver on this score but he remains in control of his writing the whole time. Shadows Son will have me coming back for a sequel... Sprunk's eye for spectacle means that if Shadow's Son was ever made into a film I'd definitely be there to watch it... a thoroughly entertaining read that had me wondering if perhaps all assassin stories aren't the same after all..."
—Graeme's Fantasy Book Review


"Wonderful fight sequences is what you expect out of a Swords & Sorcery novel and Sprunk more than delivers... Shadow's Son had me up late at night as nearly every chapter ended in climax after climax of tight action sequences to see how Caim will get out of the next scrape. I give Shadow's Son 7.5 out of 10 hats. Even though this is the first in a trilogy Sprunk does an admirable job at having a clear culmination to most of what he started while leaving plenty left open for the next volumes as things escalate. Sprunk shows loads of promise as he hones his craft."
—The Mad Hatter's Bookshelf and Book Review

"Shadow's Son has plenty of action and intrigue with a fast pace that makes this a quick read...I would recommend this as a nice casual fantasy read."
—Bella Online

"Jon Sprunk's debut novel Shadow's Son, a tale of corrupt religion and nobility, brutal assassinations and dark magic is as no nonsense as it gets... Every last sentence in this book is used to its full measure... Sprunk writes most of his action at a breakneck pace and we are all the better, as readers, for it. Said action sequences, of which there are a fair number, are concise, brutal, magical and breathless... If you are looking for a quick, dark-yet-fun episodic fantasy world, then Caim and Kit's world of action-packed chases, fights, assassins, magic and political intrigue will fit the bill quite nicely. It will, however, make you wish the sequel Shadow's Lure, was out already so you could continue the story. A quality read, and Sprunk really does have an eye for quick prose that maintains a nice atmosphere, whilst losing none of his pacing in the long run."
—Iceberg Ink blog

"Putting myself in [Caim's] position, living his life while reading Shadow's Son,
happened entirely without effort – Jon's writing style is very focused and wonderfully descriptive, so much so that I found myself devouring chapters while not actually
realizing that I was steaming through the book...The bad guys in the novel are excellent – they're unique enough to stand out, alive enough that they kept me interested, and nasty enough that they kept me cheering for Caim... Shadow's Son is a damned fine debut – Jon created some very cool, yet satisfyingly like-us characters; his setting added
flavor and nuance to the story and made me more curious about the world he's
created, the action was brutal and very close-in, and the plot sped along,
keeping me interested and invested. In fact, Shadow's Son didn't make me think
in terms of 'debut' – Jon knows what he's doing, and he enjoys doing it.
I can't wait to get stuck into Shadow's Lure! I give this novel a hearty 9 / 10"
—Dave Brenen's Fantasy and Scifi Weblog

"'Sign of the Cross' by Jon Sprunk is a story of an injured crusader who is helped by a Muslim family. It's an interesting take on the legend of St. George, and the characters are engaging and three dimensional."
—Tangent

Jon Sprunk lives in central Pennsylvania with his family. His books have been translated into seven languages in more than nine countries. When not working on his latest novel, he enjoys traveling, collecting medieval weaponry, and
watching pro football (preferably behind a beer and a big plate of hot wings).