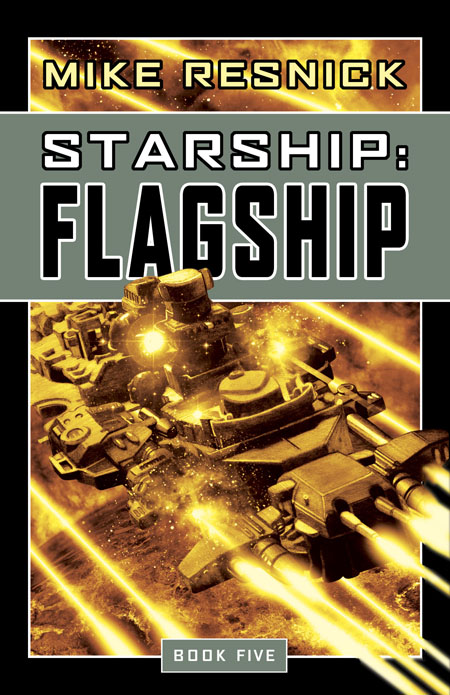 Book Five of the Starship Series

The date is 1970 of the Galactic Era, almost three thousand years from now, and the Republic, created by the human race but not yet dominated by it, finds itself in an all-out war against the Teroni Federation, an alliance of races that resent Man's growing military and economic power. The rebel starship, the Theodore Roosevelt, under the command of Wilson Cole, is preparing to lead Cole's ragtag armada into the Republic, even though he is outnumbered thousands to one. Cole is convinced that the government has become an arrogant and unfeeling political entity and must be overthrown. The trick is to avoid armed conflict with the vast array of ships, numbering in the millions, in the Republic's Navy. For a time Cole's forces strike from cover and race off to safety, but he soon sees that is no way to conquer the mightiest political and military machine in the history of the galaxy. He realizes that he must reach Deluros VIII, the headquarters world of the Republic (and of the race of Man), in order to have any effect on the government at all—but Deluros VIII is the best-protected world in the Republic. But a new threat looms on the horizon. Cole, the Valkyrie, David Copperfield, Sharon Blacksmith, Jacovic, and the rest of the crew of the Teddy R face their greatest challenge yet, and the outcome will determine the fate of the entire galaxy.

"Fast paced and entertaining….I’m still enjoying this series and am interested to see where Resnick is going to take the Teddy R. and its crew. So the bottom line is this: if you’ve enjoyed the first two Starship novels, there is no reason not to continue on with the story.”
—SFFWorld

“[J]ust the kind of easygoing and unabashedly old-school space opera romp for which we've come to know and love him ... whip-smart, fast-paced pure entertainment ... simply pure escapism, impossible to resist by anyone who still remembers that good old fashioned sense of wonder.”
— SF Reviews

“Prolific sf author Resnick (Kirinyaga; A Hunger in the Soul) launches a new series of military sf adventure with a solid introductory tale of one man's faith in himself and the loyalty of his comrades. A good choice for large sf collections.” — Library Journal

“Resnick's writing is effortless, full of snappy dialogue and a fast moving plot....This is high quality work....There's a veneer of quality and above all believability that makes this heads above many space operas...it's damn good fun.” — SFCrowsnest

Mike Resnick has won an impressive five Hugos and been nominated for twenty-six more. He has sold fifty-eight novels and more than two hundred short stories. He has edited fifty anthologies. His work ranges from satirical fair, such as his Lucifer Jones adventures, to weighty examinations of morality and culture, as evidenced by his brilliant tales of Kirinyaga. The series, with sixty-seven major and minor awards and nominations to date, is the most honored series of stories in the history of science fiction. Visit Mike Resnick online at www.mikeresnick.com. See also Starship: Mutiny (Book One of the Starship Series), Starship: Pirate (Book Two of the Starship Series), Starship: Mercenary (Book Three of the Starship Series), New Dreams for Old, Ivory, Stalking the Unicorn, Stalking the Vampire, and Stalking the Dragon.
Photograph: © Carol Resnick