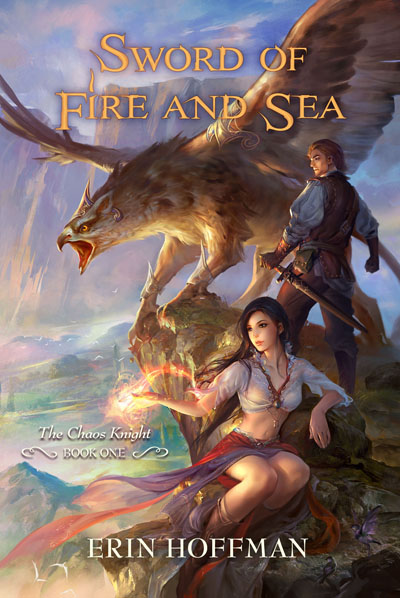 Sword of Fire and Sea

The Chaos Knight Book One

Three generations ago Captain Vidarian Rulorat's great-grandfather gave up an imperial commission to commit social catastrophe by marrying a fire priestess. For love, he unwittingly doomed his family to generations of a rare genetic disease that follows families who cross elemental boundaries. Now Vidarian, the last surviving member of the Rulorat family, struggles to uphold his family legacy, and finds himself chained to a task as a result of the bride price his great-grandfather paid: the Breakwater Agreement, a seventy-year-old alliance between his family and the High Temple of Kara'zul, domain of the fire priestesses. The priestess Endera has called upon Vidarian to fulfill his family's obligation by transporting a young fire priestess named Ariadel to a water temple far to the south, through dangerous pirate-controlled territory. A journey perilous in the best of conditions is made more so by their pursuers: rogue telepathic magic-users called the Vkortha who will stop at nothing to recover Ariadel, who has witnessed their forbidden rites. Together, Vidarian and Ariadel will navigate more than treacherous waters: Imperial intrigue, a world that has been slowly losing its magic for generations, secrets that the priestesshoods have kept for longer, the indifference of their elemental goddesses, gryphons—once thought mythical—now returning to the world, and their own labyrinthine family legacies. Vidarian finds himself at the intersection not only of the world's most volatile elements, but of colliding universes, and the ancient and alien powers that lurk between them.

"Sword of Fire and Sea is fantasy adventure in the classic tradition, and Erin Hoffman is a fine storyteller. Read it and be swept away.”
— Allen Steele


"If you like hard-hitting fantasy adventure with a lot of magic, this is your series.”
— Piers Anthony

Erin Hoffman is the author of Sword of Fire and Sea. She was born in San Diego, California, and now lives with her husband, two parrots, and a dog in the San Francisco bay area. Her college degree was eclectic and landed her in the strange waters of video game design, where she tells stories using a diabolical combination of character, controller, and math. Her games have been played by over four million kids and adults worldwide, and she is a graduate of the Odyssey Fantasy Writers Workshop.