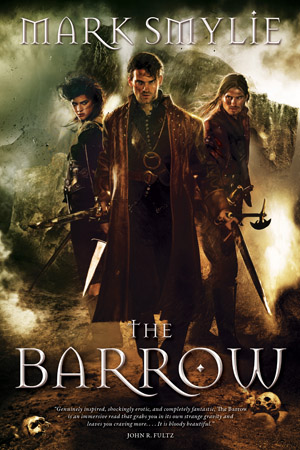 Action, horror, politics, and sensuality combine in this DEBUT EPIC FANTASY novel for fans of George R. R. Martin and Michael J. Sullivan, set in the world of the Eisner-nominated Artesia comic books.

When a small crew of scoundrels, would-be heroes, deviants, and ruffians discover a map that they believe will lead them to a fabled sword buried in the barrow of a long-dead wizard, they think they've struck it rich. But their hopes are dashed when the map turns out to be cursed and then is destroyed in a magical ritual. The loss of the map leaves them dreaming of what might have been, until they rediscover the map in a most unusual and unexpected place.

Stjepan Black-Heart, suspected murderer and renegade royal cartographer; Erim, a young woman masquerading as a man; Gilgwyr, brothel owner extraordinaire; Leigh, an exiled magus under an ignominious cloud; Godewyn Red-Hand, mercenary and troublemaker; Arduin Orwain, scion of a noble family brought low by scandal; and Arduin's sister Annwyn, the beautiful cause of that scandal: together they form a cross-section of the Middle Kingdoms of the Known World, brought together by accident and dark design, on a quest that will either get them all in the history books, or get them all killed.

"A gritty fantasy adventure set in a vivid and complex world. Fans of Joe Abercrombie and Scott Lynch will love The Barrow."
-Mike Lee, author of Fallen Angels and The Rise of Nagash

"'Epic' doesn't even begin to describe the nuances and complexities of the plots and alliances in this fresh take on highly recommended heroic fantasy."
-Jeff VanderMeer, World Fantasy Award-winning author of Annihilation

"I love Mark Smylie's world. Fans of deep, intricate settings with complex cultures and fascinating histories are in for a treat with The Barrow. Anyone who likes Steven Erikson should check this out."
-Django Wexler, author of The Thousand Names

Mark Smylie has worked as a writer, illustrator, editor, and publisher for over a decade. His epic military fantasy graphic novel series, Artesia, was first published by Sirius beginning in 1999. He was nominated for the Russ Manning Award for Best Newcomer that year, and for an Eisner Award for Talent Deserving of Wider Recognition in 2001. Over the years his illustrations have appeared in game books from Wizards of the Coast, White Wolf, and most recently Kobold Press, and in collectible card games from AEG. He designed and illustrated a role-playing game based on Artesia that won the Origins Award for Role-
Playing Game of 2006, three Indie
RPG Awards, and was nominated
for six ENnies. Mark founded Archaia Studios Press (ASP) in 2002 as a self-publishing home for his graphic novels, and the company, now an imprint at BOOM! Studios, has expanded over the years to publish a wide variety of American and European graphic novelists, including award-winning titles such as Mouse Guard, The Killer, Return of the Dapper Men, and Jim Henson's Tale of Sand.