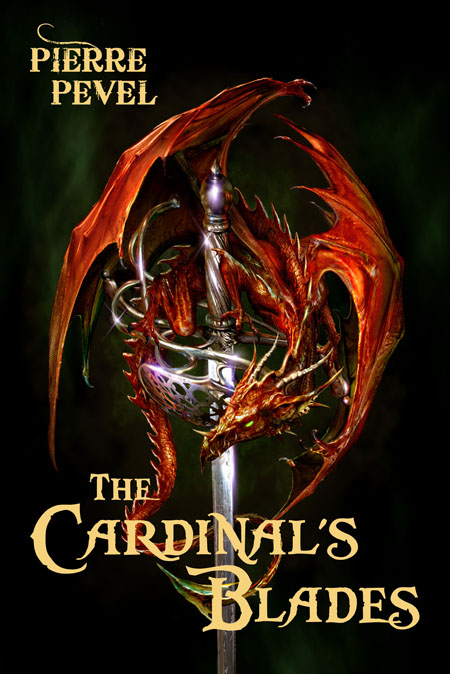 Welcome to seventeenth-century Paris, where intrigue, duels, and spies are rife and Cardinal Richelieu's agents may be prevailed upon to risk life and limb in the name of France at a moment's notice. And with war on the horizon, the defense of the nation has never been more pressing.

Danger is rising from the south—an insidious plot that could end with a huge dragon-shaped shadow falling over France, a shadow cast by dragons quite unlike the pet dragonets that roam the cities like stray cats, or the tame wyverns men ride like horses, high over the Parisian rooftops. These dragons and their descendants are ancient, terrible, and powerful ... and their plans contain little room for the lives or freedom of puny humans.

Cardinal Richelieu has nowhere else to turn; Captain La Fargue and his elite group of agents, the Cardinal's Blades, must turn the tide. They must hold the deadly Black Claw cult at bay, root out traitors to the crown, rescue prisoners, and fulfill their mission for the Cardinal, for their country, but above all for themselves.

It's death or victory. And the victory has never been less certain.

"Pevel, winner of the 2002 Grand Prix de l'Imaginaire and the 2005 Prix Imaginales, makes a stunning English-language debut with this breathless, swashbuckling tale of intrigue, spying, and swordfights. In an alternate 17th-century Paris, dragonnets are exotic pets, wyverns are high-class riding mounts, and drac thugs are the coarsest of mercenaries. After a five-year hiatus, Cardinal Richelieu reunites his elite force to aid France in its complex relationship with Spain's Black Claw cult of half-dragon royalty. A mostly straightforward adventure plot leaves plenty of room for character development, drama, and excitement. Clegg's solid translation reads pleasingly as culturally French without the language ever feeling stilted or unnatural. Published in France to great acclaim in 2007, Pevel's adventure is just as likely to charm Anglophone audiences who enjoy action-packed adventure with a true historical sensibility.
—Publishers Weekly starred review

"As an avid reader and an admirer of the Alexandre Dumas works, I found in The Cardinal's Blades a novel very much to my liking.... A fast-moving story, full of action, intrigue, and swashbuckling adventures."
— Dark Wolf's Fantasy Reviews

"If I had to sum up The Cardinal's Blades in two words, they would be: great fun. This is the France of Alexandre Dumas and Fanfan la Tulipe: a land of flashing blades and break-neck chases, beautiful women and gallant warriors, of masquerades and midnight plots and sword play. The feel is that of classical Romance—we are here in the realms of The Three Musketeers—and while dragons and their schemes are the engine of the plot, they are shadowy, threatening creatures, far removed from the allies of Temeraire and Dragonflight. This is also alternate history, and history plays an important part in the plot."
—Strange Horizons

"This is a wildly entertaining read with delightfully broken characters. Were I ten again, I'd be running around the park with sticks, pretending to be the half-dragon Saint-Lucq. Also like Dumas, The Cardinal's Blades isn't 'great literature'—there aren't deeper themes or higher ideals at stake: this is a book of swashbuckling excess, and should be celebrated as such."
—Pornokitsch.com

"The swashbuckling action and adventure, too, is one of the best reasons to read this book. Action and adventure this novel has in plenty and Pavel seems to be at his best and most effective as a writer when things get interesting. To the point, there are very effective "set-piece" encounters and battles that are exciting, well written, and helped draw me through the book... Pavel knows how to write effective, engaging and exciting encounters between the protagonists and their foes."
—Blog, Jvstin Style

"The story has much of the feel of the Alexander Dumas, although a more modern and sophisticated variation, and there are plenty of swashbuckling adventures, battles and pursuits, and secrets revealed before the end. I would be surprised if we don't see more of this author's work in translation in the near future."
—Don D'Ammassa's Critical Mass

Pierre Pevel, born in 1968, is one of the foremost writers of French fantasy today. The author of seven novels, he was awarded the Grand Prix de l'Imaginaire in 2002 and the Prix Imaginales in 2005, both for best novel.