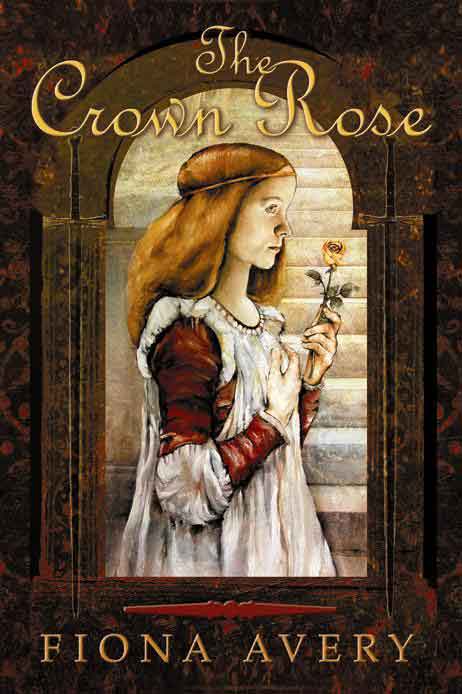 The Crown Rose tells the story of Isabelle of France, born heir to the throne: her life from childhood to her later years; a life of turmoil and strife and longing....

The year is 1240. It is the reign of King Louis IX. Knighthood is still honored, though the traditions are beginning to fade. This will be the last generation of knights as we understand them. It is a time of intense chivalry and faith; religious orders such as the Templars, the Franciscans, Dominicans, and the Knights of Malta are springing up everywhere. And it is a time of conflict between nations struggling and warring to form their own identities and their own destinies.

The Crown Rose portrays the mystery of one man who enters Isabelle's life at several key moments, becoming her icon, her soul's other half, and her destiny... a man who may, in fact, be much more than an ordinary man. His bloodline goes back to the Holy Land, and he is far, far older than he appears.

The Crown Rose weaves its tale around the actual events of the time, blending historical realism with a hint of the fantastic, drawing upon extensive research to make the story as accurate as possible. It is a tale of chivalry, knighthood, romance, and war; of lost secrets and hidden mysteries; of honor, duty and sacrifice; and the power of a few dedicated people to change the face of the world itself.

"Although Fiona Avery has worked in many media, she's best known for her comics scripting and has only now ventured into the territory of the novel with The Crown Rose .... Her debut is an impressive one, auguring well for the continuation of a dual career. The Crown Rose is a rarity in the fantasy field, in that it's a stand-alone volume, completely self-contained, and also mainly a historical novel with a subtle yet integral thread of fantastical content. Both qualities raise it above the herd, as do Avery's pleasant, limpid style, attention to detail, ingenious plotting, deft character development and canny core conceit. Elegant, understated and moodily atmospheric, this is the kind of book that should inspire a small Crusade of followers." —Washington Post

"Screenwriter, graphic novelist, and short story author Avery branches out with this fascinating novel about the real sister of the saintly King Louis IX. Strong historical underpinnings laced with a tinge of the supernatural highlight the inherent drama of siblings at the end of the age of chivalry. Essential for lovers of historical fantasy."
—Library Journal

"Avery's debut novel is steeped in historical facts, attention-attracting details and subtle threads of the mysterious and marvelous. The clever plot provides credible explanations for historical events involving religious relics as well as major players in the Christian faith. The characters are well-developed ... and the dialogue is a smooth blend of French period vernacular and modern English. This richly woven tapestry of mysticism and miracles is a keeper that will satisfy all."
—Romantic Times

"Avery does an excellent job of presenting her characters and their world. At the same time she builds mysteries which draw the reader in as the mysteries both deepen and move toward their conclusion."
—Sfsite.com

"[A] fascinating novel about a period in history imbued with mysticism, and it is exciting to read something so well encompassing that tradition. Fiona Avery has a marvelous talent for vivid characterization, and makes Isabelle and her family and servants glow with realism. This is a well-researched book, and it shows. Give yourself a trip to the thirteenth century and get this book!"
—ReadertoReader.com

"The Crown Rose is a truly enchanting book. From start to finish I found myself wrapped in a velvet cloak of a story. Warm, comfortable and totally enveloping. [Avery] has a talent that must be explored further. A truly stunning book."
—The Eternal Night

"The Crown Rose brims with the rich detail that gives historical writing life - the sights, sounds, smells and tastes of thirteenth-century France surround the reader in a tale of intrigue, love, and a bit of the strange. Wonderfully written, imagined and researched, it is a well-guided tour of what might-have-been - or perhaps what was."
—Greg Keyes, New York Times bestselling
author of The Briar King and The Charnel Prince

"Passionate and richly imagined, The Crown Rose leads us between the lines of history into a past of rich immediacy, fertile with intrigue and fervent with romance. Kudos to Fiona Avery for this stirring read!"
—Terry McGarry, author of Illumination, The Binder's Road, and Triad

"The Crown Rose hurls us into France in the Thirteenth Century - a threatened nation, struggling to survive, and teeming with warriors and monks, philosophers and politicians, saints and sinners. Superb battle sequences and a truly mystical story blend in an exciting recreation of one of the hinge moments of history. This novel is a reflection of both the supernatural beliefs of the Middle Ages and life in a time of brutal military reality. An unusual heroine, a series of unforgettable heroes, and many real historical characters make Fiona Avery's The Crown Rose an exciting and challenging read."
—Peter Woodward, writer / host, "Alexander the Great," The History Channel

Fiona Avery is an award-winning writer working in Los Angeles, California. Her previous television credits include work on Babylon 5, Crusade and Earth: Final Conflict. In 2001, her short story "Luring the Tiger Out of the Mountains" earned an honorable mention in The Year's Best Science Fiction, published by St. Martin's Press. Since 2000, Avery's writing has been placed among the best-selling comics with works such as the Eisner-winning Amazing Spiderman, Tomb Raider, Witchblade and X-Men. In 2004, Amazing Fantasy and its continuing series Arana won the Big Apple Award from the mayor of New York and its leading character was named "Woman of the Year!" by Latina Magazine. Wizard Magazine has listed Fiona Avery in its exclusive Top Ten Creators list. Her original comic book property, No Honor, was recently optioned by Platinum Studios and is in development as a feature film.