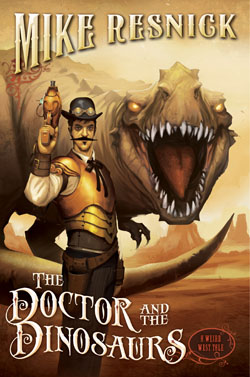 The Doctor and the Dinosaurs

The time is April, 1885. Doc Holliday lies in bed in a sanitarium in Leadville, Colorado, expecting never to leave his room again. But the medicine man and great chief Geronimo needs him for one last adventure. Renegade Comanche medicine men object to the newly-signed treaty with Theodore Roosevelt. They are venting their displeasure on two white men who are desecrating tribal territory in Wyoming. Geronimo must protect the men or renege on his agreement with Roosevelt. He offers Doc one year of restored health in exchange for taking on this mission.

Welcome to the birth of American paleontology, spearheaded by two brilliant men, Edward Drinker Cope and Othniel Charles Marsh, two men whose genius is only exceeded by their hatred for each other's guts.

Now, with the aid of Theodore Roosevelt, Cole Younger, and Buffalo Bill Cody, Doc Holliday must save Cope and Marsh not only from the Comanches, not only from living, breathing dinosaurs, but from each other. And that won't be easy.

Praise for the Weird West Tales:

"A mad mixture of steampunk and magic set in an alternate Wild West, this is hugely entertaining and should please fans of SF and westerns."
—Booklist, starred review

Mike Resnick (Cincinnati, OH) has won an impressive five Hugos and has been nominated for thirty-one more. The author of the Starship series, the John Justin Mallory series, the Eli Paxton Mysteries, and three other Weird West Tales, he has sold sixty-nine novels and more than two hundred fifty short stories and has edited forty anthologies. His Kirinyaga series, with sixty-seven major and minor awards and nominations to date, is the most honored series of stories in the history of science fiction.