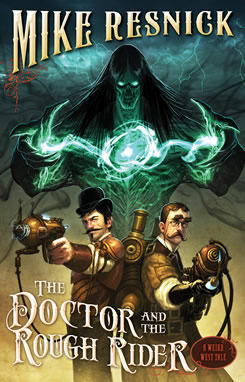 The Doctor and the Rough Rider

It's August 19, 1884. The consumptive Doc Holliday is preparing to await his end in a sanitarium in Leadville, Colorado, when the medicine man Geronimo enlists him on a mission. The time the great chief has predicted has come, the one white man he's willing to treat with has crossed the Mississippi and is heading to Tombstone—a young man named Theodore Roosevelt. The various tribes know that Geronimo is willing to end the spell that has kept the United States from expanding west of the Mississippi. In response, they have created a huge, monstrous, medicine man named War Bonnet, whose function is to kill Roosevelt and Geronimo and keep the United States east of the river forever. And War Bonnet has
enlisted the master shootist John Wesley Hardin.

So the battle lines are drawn: Roosevelt and Geronimo against the most powerful of the medicine men, a supernatural creature that seemingly nothing can harm; and Holliday against the man with more credited kills than any gunfighter in history. It does not promise to be a tranquil summer.

"A mad mixture of steampunk and magic set in an alternate Wild West, this is hugely entertaining and should please fans of SF and westerns."
—Booklist, starred review

"Brilliant. Scary, funny, often very moving. Left me wishing I could have shared a couple of whiskeys with Wyatt and Doc."
—Jack McDevitt
Nebula Award–winning author of Echo

"A fast, fun, and often-amusing tale where Wild West meets steampunk. . . . Told in a spare style reminiscent of a tale told round the campfire, The Buntline Special has a mythic feel. It's a modern-day tall tale with the requisite larger-than-life characters."
—Miami Herald

Mike Resnick has won an impressive five Hugos and has been nominated for thirty more. The author of the Starship series, the John Justin Mallory series, and the Weird West Tales, he has sold sixty-nine novels and more than two hundred fifty short stories and has edited forty anthologies. His Kirinyaga series, with sixty-seven major and minor awards and nominations to date, is the most honored series of stories in the history of science fiction.