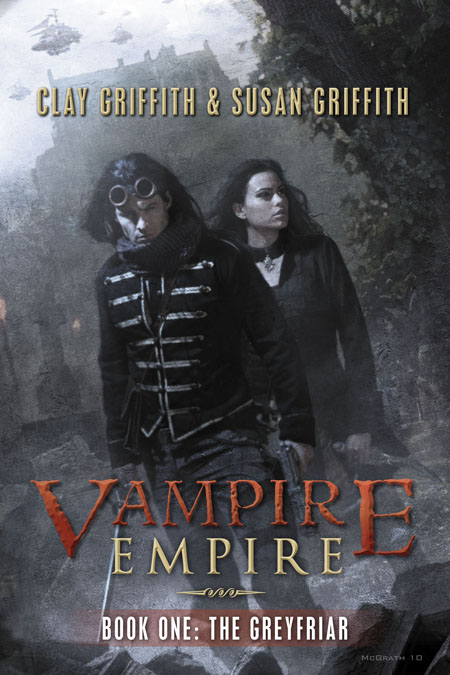 In the year 1870, a horrible plague of vampires swept over the northern regions of the world. Millions of humans were killed outright. Millions more died of disease and famine due to the havoc that followed. Within two years, once-great cities were shrouded by the gray empire of the vampire clans. Human refugees fled south to the tropics because vampires could not tolerate the constant heat there. They brought technology and a feverish drive to reestablish their shattered societies of steam and iron amid the mosques of Alexandria, the torrid quietude of Panama, or the green temples of Malaya.

It is now 2020 and a bloody reckoning is coming.

Princess Adele is heir to the Empire of Equatoria, a remnant of the old tropical British Empire. She is quick with her wit as well as with a sword or gun. She is eager for an adventure before she settles into a life of duty and political marriage to a man she does not know. But her quest turns black when she becomes the target of a merciless vampire clan. Her only protector is the Greyfriar, a mysterious hero who fights the vampires from deep within their territory. Their dangerous relationship plays out against an approaching war to the death between humankind and the vampire clans

Vampire Empire: The Greyfriar is the first book in a trilogy of high adventure and alternate history. Combining rousing pulp action with steampunk style, Vampire Empire brings epic political themes to life within a story of heartbreaking romance, sacrifice, and heroism.

"I have read 117 vampire novels in the last fifteen months. Some were great, some mediocre. But I LOVED this book. The Greyfriar is an extraordinary character. I put the book down wishing I could read the sequel immediately. The writing is lyrical and poignant. And like all of the truly best vampire novels, issues of morality and the use and abuse of power are paramount."
—Margot Adler, author of Drawing Down the Moon and Heretic's Heart; creator of the "Hour of the Wolf" radio show on WBAI, New York City

"I love this book. It's epic and lovely, heartbreakingly romantic (in every sense
of the word), and an incredibly satisfying read, both for the characters and
the richness of the world."
—Marjorie M. Liu, New York Times bestselling author of the Hunter Kiss and Dirk & Steele series

"I am totally and completely enthralled with The Greyfriar. The style of this
book is eloquent, creating such a beautiful world and story with just words.
Steampunk is not usually a visually beautiful world with its machines and steam
powered alternate history... I do not give 5/5 ratings very often, but this book is a
solid 5 for me. If I had book two right now, I'd immediately start reading. This is
one of my 2010 best book picks and I cannot recommend it enough."
—A Tale of Many Reviews blog

"Have you ever looked at the picture of the front cover of a book and, without looking at either the author's name or the title, without knowing the genre or the imprint, have you ever looked at a book's cover and said: this book I must read? I did that, a few weeks ago. The book in question was Vampire Empire, Book One: The Greyfriar. "
—Bibliobuffet's Bookish Dreaming blog

"I put the book down feeling very satisfied, which is a feeling I just don't associate with vampire books anymore...The Greyfriar...has something to satisfy almost anyone. What excites me the most about this book is that it's the first in a trilogy and it really shows flair and promise...I enjoyed this book so much as it is that the thought of anything more nearly sends me into heart palpitations."
—Bookworm Blues, December 21, 2010

"The Greyfriar is an alternate history, steampunk novel that just took me for an unforgettable ride… Princess Adele was a great lead. In the beginning…she was strong and kind, but she still had an air of royalty – that of someone who is used to being served and pampered. When her journey starts underway however, she slowly morphs into this warrior type… something akin to Robin hood, Greyfriar is this masked man who fights for humans against the vampires. I loved Greyfriar as the hero in this book… I don't want to give anything away, so I'll just say that his character quickly became my favorite. His chemistry with Adele is undeniable, but with a war looming there is no way that they can be together.The plot…had me on the edge of my seat. There was unrequited love, diabolical vampires, and journeys to unknown lands. Everything that almost guarantees that I'll be engrossed in it. Overall, I loved The Greyfriar… Anybody who's looking for a good story should definitely pick this one up, I'm sure glad that I did."
—Literary Escapism.com

"There is a lot of steampunk fiction coming out right now, and of course, a
dizzying amount of vampire fiction, and pretty much every new novel in either category claims to reinvent its genre. Every now and then, however, a book comes along that actually does. …The Greyfriar,…may not be the first novel to blend steampunk and vampires, and it may be composed of numerous recognizable plots, and yet it manages to recalibrate the old stories and tropes with such genuine ingenuity and seeming effortlessness that it never fails to feel anything less than utterly original and
dazzlingly new… I decided to read this novel, because I found the synopsis on the back cover intriguing, but it didn't quite prepare me for how deeply in love with this book I would fall. It has elements of alternate history, steampunk, war, politics, satire, adventure, action, graphic novel, romance, horror, suspense, and more, and yet all of these well-worn elements join together in a manner that is completely unique.
The pacing is perfect, the character development stunning, and the narrative twists and turns superb. It also has an appealingly sly sense of humor that manages to infuse even its darkest sections with humanity and warmth. It succeeds on every level and seems to invent whole new ones. If you've grown tired of vampires and/or steampunk,
The Greyfriar is the paradoxical cure for what ails you–a vampire steampunk novel that makes both genres feel shiny and new again."
—RobWillReview.com

"The vampires in this novel were very unique…a breath of fresh air, because of their originality and how evil and harsh they were… This novel starts out slow, but catches you by surprise about forty pages in. From there, it grabs you and doesn't let go… The action-packed ending was fantastic and left me wanting the next book now without being a cliffhanger. Overall: 4.5 stars (5 Stars = Near perfection. 4 Stars = Very good.)"
—Sara's Urban Fantasy blog

"The Greyfriar is pulp adventure at its best. Think Zorro with vampires.
Add to the mix the conflicting but equally byzantine politics of multiple human and vampire nations, and a crew of mysterious mystics. Season with appealing protagonists, a full measure of steam-driven gears and rocket-powered pacing, and you've got the recipe for my favorite kind of mind candy… a story crafted to keep you compulsively turning pages until the wee hours. But like all satisfying adventures, The Greyfriar addresses bigger issues… This is a tale of imperialism, 'manifest destiny,' global conflict and power plays seen from both vampire and human eyes."
—Buzzy Multimedia: Sci-Fi & Fantasy Books
(http://blog.buzzymultimedia.com)

"The Greyfriar is an interesting mix of dark fantasy alternate history and steampunk.
Far from the sparkly romantic type, these vampires are closer to the creatures that haunted the nightmares of our ancestors- animalistic, foul and sadistic. The Greyfriar is filled with fast-paced action and well written characters, making this a great story that draws you in and keeps you reading. I couldn't put this one down!"
—BellaOnline

"An incredible masterpiece of a story that is intense, exhilarating, and completely delicious... a 5 out of 5, hands down. In fact, I'd probably give it more if I could.
I recommend that everyone buy this book as soon as it releases…
because it is a definite must-read."
—I Swim For Oceans (YA book blog)

Clay & Susan Griffith are a married couple who have written and published together for more than a decade. Their credits not only include two novels for Bantam Doubleday Dell in the mid-1990s and another novel for Pinnacle Entertainment Group in 2002 but also numerous short stories published in many anthologies, some featuring noted genre characters like Kolchak the Night Stalker and The Phantom. They've also written scripts for television and published graphic novels. The authors have attended many cons multiple times over the years, including World Fantasy, WorldCon Science Fiction, ComicCon (San Diego), DragonCon (Atlanta), HeroesCon (Charlotte), and other smaller conventions. They are committed to doing every con they can find for Vampire Empire, and are already planning on attending the Sci-Fi/Comic Con in Chicago and ComicCon in New York City next year. These are two hardworking authors, in every sense!