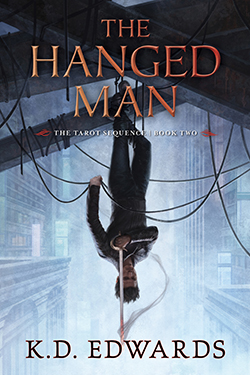 The last member of a murdered House tries to protect his ward from forced marriage to a monster while uncovering clues to his own tortured past.

The Tarot Sequence imagines a modern-day Atlantis off the coast of Massachusetts, governed by powerful Courts based on the traditional Tarot deck.

Rune Saint John, last child of the fallen Sun Throne, is backed into a fight of high court magic and political appetites in a desperate bid to protect his ward, Max, from a forced marital alliance with the Hanged Man.

Rune’s resistance will take him to the island’s dankest corners, including a red light district made of moored ghost ships; the residence of Lady Death; and the floor of the ruling Convocation, where a gathering of Arcana will change Rune’s life forever.


The gang war brewing between Prohibition bootleggers may be the least of his concerns. If Nick cannot prevent an old evil from opening the way between realms…then not only might Chicago face a fate worse than the Great Fire, but so will the rest of the mortal realm.

“It fulfilled every promise made by The Last Sun and set the entire series into an even more exciting direction.”
—Fantasy Inn


“A thrilling and satisfying follow-up to The Last Sun, The Hanged Man proves that K.D. Edwards is the real deal. The story shines with unique and complex world-building, stellar writing, and a fast-paced plot that is rounded out with humor and heart-felt emotional moments. I didn't want the book to end!”
—Books, Bones & Buffy


“After finishing, I had precicely one word: Wow. It's a perfect blend of action-y and character-focused and offers something for just about everyone.”
—To Other Worlds


“KD Edwards plays to his audience in the best possible ways, crafting a fun, engaging narrative that will tug on your heartstrings.”
—Black Forest Basilisks

K.D. Edwards is the author of The Last Sun, book one of the Tarot Sequence. He lives and writes in North Carolina, but has spent time in Massachusetts, Maine, Colorado, New Hampshire, Montana, and Washington State. (Common theme until NC: Snow. So, so much snow.) Mercifully short careers in food service, interactive television, corporate banking, retail management, and bariatric furniture have led to a much less short career in higher education, currently for the University of North Carolina System.