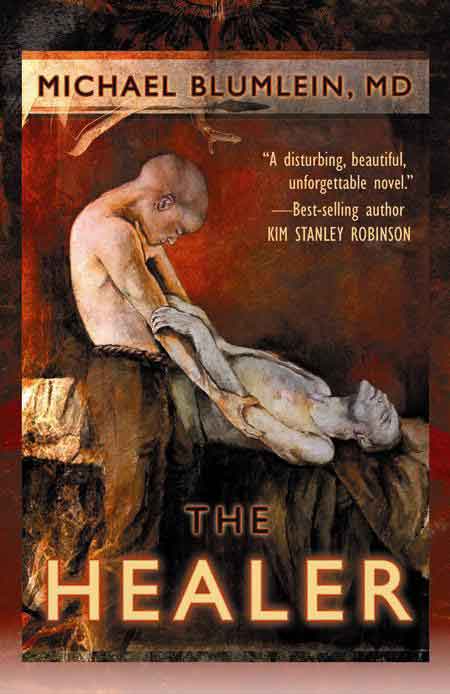 Payne is a member of a minority offshoot of humanity called Grotesques, or Tesques, who are distinguished by a cranial deformity and an extra orifice in their chest. A small percentage of Tesques have the ability to effect phenomenal healings, which makes them a valuable commodity in their world. Sadly, such gifted healers live a life somewhere between that of a possession and a slave.

Payne is unusual in that he is seemingly unaffected by the mysterious burn out (called "The Drain") that all other healers experience. The novel follows his journey across the strange landscape of his world in a search for an acceptance he may never find. Along the way, we move from the outskirts of society, to an isolated mining camp, to a metropolis dedicated to gambling and vice, to a secret government compound where the most dangerous of healings are performed. Finally, we climax in a scene where reality meets mythology, and Payne experiences a transformation that will forever alter the balance between Tesques and Humans.

Blumlein brings his experience as a practicing physician to bear in this novel, which subtly and beautifully examines the ways in which society both reveres and fears members of the medical profession. The Healer is a story of human life and death, human rites and rituals, seen through the eyes of an outsider, one who knows humans better, perhaps, than they know themselves. In the vein of such authors as Jonathan Lethem and Jonathan Carroll, The Healer is literate, philosophical, entertaining, moving and original.

"Blumlein has invented and elaborated in convincing fictional detail an alternate healing science not only unlike any contemporary or past school of medicine, but whose internal logic holds up quite well on as literary level...a very deep and very interesting and very interior meditation on what it is to be a healer."
—Asimov's Science Fiction

"... Blumlein has a gift for beautifully evocative prose, and Payne's story has the resonance of a modern fable."
—Booklist

"[T]his book is thoroughly enjoyable....the reader is pulled into an engrossing story ... well written and very entertaining .... 4 out of 5 stars."
—SFSignal

"Star Rating: * * * * * Every now and again a book surprises me.... This is an incredible book, full of exquisite prose. I know this may sound a little overblown but I cannot describe this book in any way else."
—Brum Group News (the Birmingham, UK Science Fiction Group monthly newsletter)

"I had never heard of this author before starting this book....But I suspect that Blumlein will soon become a lot more widely known than he is now, and on the basis of this book he so deserves to be."
—The Eternal Night Science Fiction, Fantasy, and
Horror Fiction Web Site (www.eternalnight.co.uk)

"The Healer moves far beyond a novel of political or social awakening.
Nor is it a novel of revolution. It is a much more heartfelt and personal work.
The Healer is a journey to the Self."
—Strange Horizons

"Blumein knows how to tell a story and how to hold a reader's attention."
—Interzone

"The Healer is one of those special works of art that has the power to
change forever your view of the world and your own bodily reality.
A disturbing, beautiful, unforgettable novel."
—Best-selling author Kim Stanley Robinson,
The Years of Rice and Salt, Forty Signs of Rain

"The Healer is a landmark in its genre, for Michael Blumlein takes the literalised metaphors of science fiction to an entirely new place - the illness and the health of the human body. His novel is a study of power, but not mere political or technological power: what it wonderfully imagines and examines is the healer's power, the gift of curing, and the responsibility and the mystery of that gift. Quietly told and passionately felt, this is a book of real and rare originality."
—Hugo & Nebula award-winning author Ursula K. Le Guin,
Gifts, Changing Planes

"[A] very thoughtful book, and I am not in the least bit surprised that it comes with glowing recommendations from authors such as Kim Stanley Robinson and Ursula Le Guin. It also has good characterization, .... If you like your SF to major on social issues, then I can warmly recommend this book to you."
—Emerald City

Michael Blumlein is the author of The Movement of Mountains (St. Martin's Press, 1987) and X,Y (Dell, 1993), as well as the award-winning story collection The Brains of Rats (Scream Press, 1990, re-released by Dell in 1997). A frequent contributor to the Magazine of Fantasy and Science Fiction and Interzone, his short stories have been anthologized many times, including several appearances in the prestigious The Year's Best Fantasy and Horror Annual Collection and The Year's Best Science Fiction. He has been nominated twice for the World Fantasy Award and twice for the Bram Stoker Award. He has written for the stage and for film. His novel X,Y was recently made into a movie. In addition to writing, Dr. Blumlein practices and teaches medicine at the University of California at San Francisco. Visit him online at www.michaelblumlein.com/.