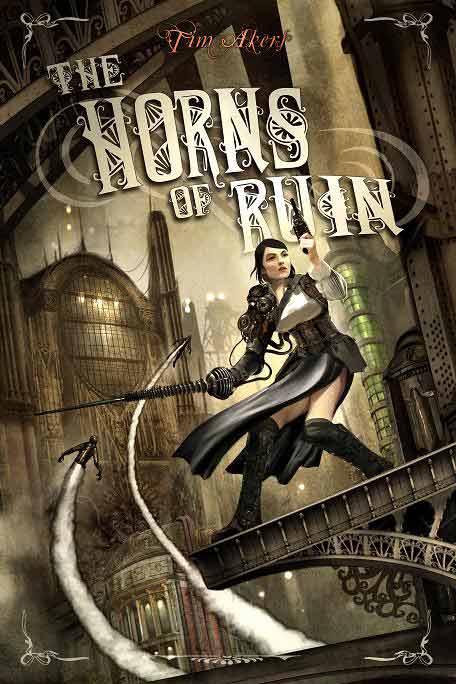 The Horns of Ruin

Eva Forge is the last paladin of the dead God, Morgan.

Eva, forsaken by her parents and forgotten by her family, was the last child dedicated to the Cult of Morgan. Morgan, God of battle and champion of the Fraterdom, was assassinated by his jealous brother, Amon. Over time, the Cult of Morgan has been surpassed by other Gods, his blessings ignored in favor of brighter technologies and more mechanical miracles. Now, Eva watches as her new family, her Cult, crumbles around her.

When a series of kidnappings and murders makes it clear that someone is trying to hasten the death of the Cult of Morgan, Eva must seek out unexpected allies and unwelcome answers in the city of Ash. But will she be able to save the city from a growing conspiracy, one that reaches back to her childhood, even back to the murder of her God?

As Eva wields her sword and wits in a city full of wonders, her story becomes the first perfect merger of steampunk and sword and sorcery.

"Akers knows how to spin a tale with depth, complexity, and a bit of humor."
—The Mad Hatter's Bookshelf & Book Review

"Some interesting juxtaposition of science and magic, and an exciting story."
—Don D'Ammassa's Critical Mass

"Hard to put down. From the compelling opening sentence...to the last, The Horns of Ruin is...powerful, relentless and impossible to ignore... Fantasy and steampunk readers, particularly any fan who loved Elizabeth Moon's The Deed of Paksenarrion, should not miss The Horns of Ruin."
—Miami Herald

"...compelling, action-packed...Between the history of the Gods, the description of the city, and the political climate, this is an interesting world to read about. Akers doesn't leave a lot of loose ends hanging, but there's plenty of room for more stories in this setting. I can't wait for the sequels."
—Fantasy Literature

"The story is a fascinating one that is generally well told...Akers creates the paradox of having written a relatively short book with a long story
packed tightly into it."
—Ray Gun Reviews

"It's stylish and sarcastic and very, very steampunk. It makes me want to be in an audience where Tim Akers and Andy Remic talk about how they do what they do—some of their big picture decisions are very similar and yet their books are exquisitely different. It makes my mind wander. It makes me smile. I read the first page and I smiled. I meant to stop reading tonight and get some sleep, but I read the second page and smiled again. I couldn't stop reading."
—Bibliobuffet's Bookish Dreaming blog

Tim Akers was born in deeply rural North Carolina, the only son of a theologian. He moved to Chicago for college, where he lives with his wife of thirteen years and their German shepherd. He splits his time between databases and fountain pens.

You can visit Tim's Web site at shadoth.blogspot.com.