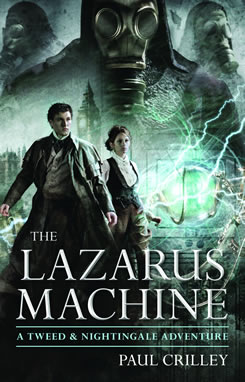 Steampunk adventure for fans of Sherlock Holmes and Doctor Who

A world where Charles Babbage and Ada Lovelace perfected the Difference Engine. Where steam and Tesla-powered computers are everywhere. Where automatons powered by human souls venture out into the sprawling London streets. Where the Ministry, a secretive
government agency, seeks to control everything in the name of the Queen.

It is in this claustrophobic, paranoid city that seventeen-year-old Sebastian Tweed and his conman father struggle to eke out a living.
But all is not well. . .

A murderous, masked gang has moved into London, spreading terror through the criminal ranks as they take over the underworld. As the gang carves up more and more of the city, a single name comes to be uttered in fearful whispers.

When Tweed's father is kidnapped by Moriarty, he is forced to team up with information broker Octavia Nightingale to track him down. But he soon realizes that his father's disappearance is just a tiny piece of a political conspiracy that could destroy the British
Empire and plunge the world into a horrific war.

"Paul Crilley's writing has an imaginative flair that brings the steampunk London of his books to shimmering life, from its gritty depths to its magical heights. It's easy to be carried along those winding streets with his memorable young characters into adventures that lead not just to thrilling climaxes, but to self-discovery as well."
—Sarah Prineas, author of the Magic Thief series and Winterling